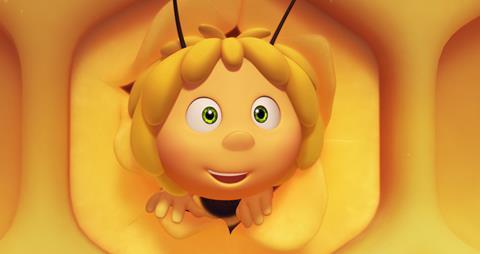 Maya, a cheeky girl honeybee, was created in 1912 by German children’s author Waldemar Bonsels. A century later, after a fondly remembered German television series in the late 1970s and a highly successful German/Austrian/Japanese series that began in 2012, Maya gets feature-length CGI animation via a German/Australian coproduction.

Maya herself is voiced by nine-year-old Aussie-accented Coco Jack Gillies who does a jolly, infectious job as an innocent heroine with “more spunk than a barrowload of lightning bugs”.

The German-voiced version has been successfully released in 11 territories ($5.1m after six weeks in Germany). At the first English-voiced premiere in Sydney the cinema was packed with happily antennaed Bee fans.

This merry movie is for young children, mainly girls: step aside, Dora the Explorer! Starting out Down Under in 2014 with voice performers from the local A-list, including Jacki Weaver, Richard Roxburgh, Noah Taylor, Kodi Smit-McPhee and Miriam Margolyes, it moves on to the US in May 2015 and will land in the UK later in the year.

In vivid colours and plenty of unthreatening action, young Maya (Aussie-accented Coco Jack Gillies) is bored with regimented hive life and takes to the meadows with her bee pal Willy (Smit-McPhee) in search of adventure. With the help of Flip (Roxburgh), a Cockney grasshopper who sports a Jiminy-Cricket-style top hat, Maya avoids such enemies as hornets, moths, dung beetles and spiders, while rescuing the Queen (Margolyes) from a scheming Court Adviser (Weaver).

Maya herself is voiced by nine-year-old Gillies who does a jolly, infectious job as an innocent heroine with “more spunk than a barrowload of lightning bugs”. Miss Gillies is already a very busy actor. She’s unlikely to be quite so innocent in her next movie, 2015’s Mad Max: Fury Road.