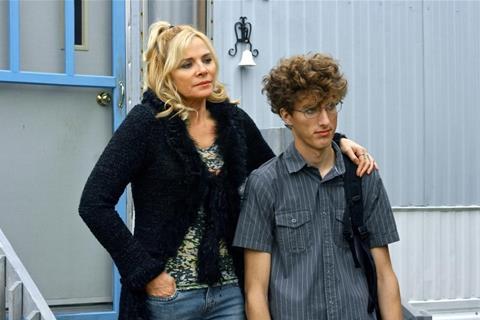 Cattrall plays Monica with a weary, lived-in quality that helps paper over the character’s lack of development.

Opening in limited release on April 8, Meet Monica Velour will need to rely on Cattrall fans to generate much theatrical interest. It seems far more likely that this low-budget offering will instead quickly migrate to DVD and cable, where Cattrall’s name might help lure the curious.

Cattrall plays Monica with a weary, lived-in quality that helps paper over the character’s lack of development, but Ingram badly overplays Tobe’s hopeless awkwardness, failing to make this lanky virgin likable. Although Bearden telegraphs early on that there probably isn’t much hope for a real romance between these two very different people, Tobe’s ineffectual, clueless behaviour starts to grate pretty quickly, making it nearly impossible to root for his attempts at wooing the much older woman.

Helping to anchor the film is Keith David as an unlikely mentor to Tobe, but otherwise the supporting performances tend to lean toward generic types, most disappointingly with Brian Dennehy as Tobe’s cranky, boozing grandfather.