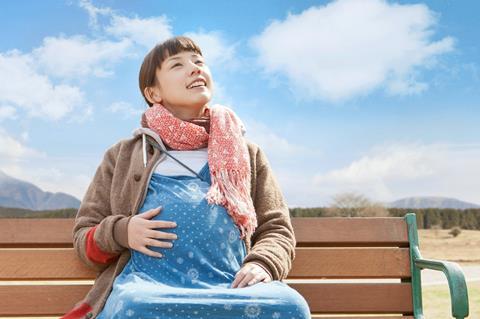 The charmingly quirky Mitsuko Delivers – the follow-up film from writer-director Yuya Ishii’s, whose film Sawako Decides was a regular on the festival circuit – might be a little scattershot in tone, but it is driven by a wonderful performance by Riisa Naka as the heavily pregnant Mitsuko whose determination the make things happen in her life has a massive impact on those around her.

Mitsuko Delivers is gently entertaining and will certainly leave audiences with a smile.

The film might well be a tough sell to the international arthouse market – comedy never travels well -  but Yuya Ishii’s growing reputation combined with Riisa Naka’s charismatic performance could well help open doors to distributors fond of subtly humourous Japanese films. The film had its world premiere at the Vancouver Film Festival, and also screened at the Tokyo International Film Festival.

Mitsuko Hara (Naka) is 24, nine months pregnant and estranged from the American father of her child, but still telephones her parents in Tokyo to tell them she is happy and successful the US. In fact she is back in Tokyo and evicted from her apartment. She decides to follow a cloud – she makes big decisions on such whims – and finds herself back living in the ramshackle tenement street where she and her parents lived when she was a child.

She reconnects with her bedridden former landlady and a childhood sweetheart, and in her own sweet way – a mixture of tough belligerence and cute charm – reignites the lives of those in the tenement street, creating a new and strange family who, while appreciating her drive and determination, come to realise that Mitsuko needs help and support as well.

There are plenty of quirky moments – such as the landlady waiting for an unexploded shell under her house to explode and Mitsuko’s insistence that everyone take a nap when she is faced with having to make tough decisions – and Riisa Naka’s sheer force of personality helps things along, though at times it feels a little undecided if it is relying on satire or surreal humour. But in a basic level Mitsuko Delivers is gently entertaining and will certainly leave audiences with a smile.