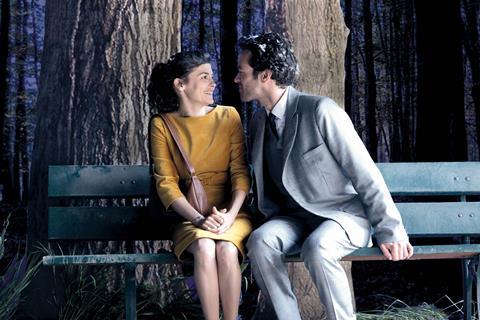 The surrealism receptors on viewers’ funny bones may short out in the first 10 minutes of Mood Indigo (L’Ecume des jours) as Michel Gondry is not shy about pouring on the wacky visuals. What’s pleasing is that the pretty much non-stop special effects are achieved through analogue means.

There is no sex, but there is a great deal of love and friendship.

This aggressive and exhaustingly inventive take on Boris Vian’s post war novel is wall-to-wall bespoke whimsy. Don’t read any poetry or absorb any puns before you go or you might die of an overdose.

If you believe there’s such a thing as a sure-fire commercial formula, you couldn’t wish for a better combo than a beloved book and this cast. And yet, the result is so relentlessly creative that viewers may actually feel they’re getting too much for their money. Romain Duris! Audrey Tautou! Omar Sy! Jazz! Paris!

In France, wildly talented polymath Vian’s 1947 novel is one of those cultural touchstones shared across generations. People who read it 10 or 30 or 50 years ago will tell you of scenes that have stuck with them — at a very peculiar ice skating rink for example, rendered here on an impressive scale.

The underlying template is as basic as can be. Boy meets girl. They court with glee and marry. They’re deleriously happy. She develops an impediment to her health, which worsens. It’s Love Story - although this version came first.

Although nobody in the cast is all that young, there’s a youthful vibe with lots of dancing and bouncing and jumping and flying. A few truly good bad puns are spelled out with visual equivalents.

Gondry builds a beautifully busy alternate universe full of surprises, delighting in good French design and bric-a-brac as effortlessly as Moonrise Kingdom championed the memory-jolting inherent worth of stamped letters in envelopes and hardcover books with dust jackets.

Since Gondry couldn’t turn Paris back into the way it looked in the 1950s, we’re shown a contemporary Paris with a retro vibe in clothes and other accoutrements. This gamble absolutely works.

Vian tapped into the ambient absurdity of a post war society hell bent on progress which Gondry renders with a vintage-futurist bent. True to the book, one Rube Goldberg-style device mixes cocktails based on the notes one plays on a piano.

Colin meets Chloé (Taoutou) at a party. They’re living together moments after their first kiss. The priest who marries them (a desultory Vincent Rottiers) says he wishes them a life in which working for a living isn’t necessary.

There are some gratuitous and/or repetitive details but most of the imagery serves a purpose — that of translating Vian’s prose fandangoes (eels slithering out of a sink faucet, anybody?) into pictures with a side order of human feelings and emotions. This over-eager approach will grow tiresome for many viewers but, in its defense, an overload of hand-made creativity feels a lot healthier than watching endless CGI or CGI + 3D assault one’s retinas.

Shrunk down to rodent size Sacha Bourdo is strangely touching as a mouse who lives with Colin inside a minature home that’s identical to Colin’s nifty digs. Partre arrives with a surrogate Simone de Beauvoir in a scene whose overstuffed outlandishness Fellini would not have rejected.

There is no sex, but there is a great deal of love and friendship. The spectre of an ending to what seemed eternal takes hold when it’s revealed that Chloé has something - well, a water lily if you must know - in her lung.

Vian’s love story also carries a strong component of denouncing the draining world of work. Colin has plenty of money when the tale begins. But when Chloé’s illness requires treatment as costly as it is unusual,  Colin, of necessity, enters the world of gainful — if inane — employment and the whole world seems to go gray.

The film sometimes wears its symbollism lightly and sometimes not. As Chloé’s condition worsens, the film is drained of its colours and the couple’s standard of living grows lower and lower - literally.

The post-war love of American jazz (Vian was an accomplished trumpetist until his own heart condition made it unwise for him to play) is ever-present and Gondry’s background in music videos serves him well for the jazzy components of the tale. A Paris Metro station is matter-of-factly named after the jazz pianist Erroll Garner.

Screenplay: Michel Gondry and Luc Bossi based on the novel L’Ecume des jours by Boris Vian