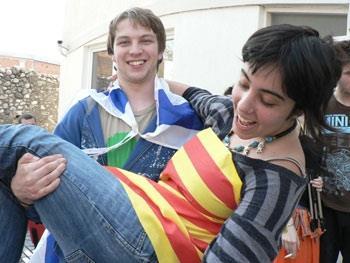 Almost a dozen years after his Love Inventory (2000,) in which he told the world about his family and its problems, made the festival rounds, David Fisher is back behind the camera, and once again it is a family affair through and through.The film premiered at the Jerusalem Film Festival.

The film can’t help stumbling over some of the most relevant and often disturbing issues of the moment.

Having spent most of the time between the two films backing documentaries as the head of the New Foundation for Cinema and Television in Israel, Fisher, now released from his official duties, turns his gaze back into his own home with a probing look at his relationship with his 17 year-old son, Yuval. Festivals are bound to be interested not only in Mostar Round Trip (Mostar Haloch vashov) and its potential to generate lively round-table debates.

Fisher, who sent Yuval to the Mostar branch of UWC (United World Colleges), A British-originated educational movement aiming at bringing together high school students from all over the world, pays him a number of visits in the course of the film, hoping to establish a closer and more intimate contact, which he evidently feels he had been too distracted by his job to reach earlier on.

During these brief visits he gets to know Yuval’s school mates, some of them Israelis, others Bosnians - both Muslim and Christian - Germans, Spaniards and a young Arab-Israeli boy, Sallam, whose passport and official allegiance may be Israeli but whose intimate identity is not.

Through Fisher’s camera, the youngsters seem to be a pretty happy lot, taking Mostar’s grim past almost for granted and not paying much attention to the animosity reigning between Muslims’ on one side of the river and Croats, on the other and its potential to erupt once again into acts of violence. They fool around, enjoying each other’s company, play the guitar, sing songs, throw parties and whenever there is some time left, they also study.

Dealing mainly with the interaction between father and son, Fisher’s film effectively captures the charm of Yuval’s romance with his Spanish girlfriend Neos, and their sad separation at the airport; or the emotion on the face of Lily, Fisher’s wife, at her son’s graduation ceremony.

At the same time, the film can’t help stumbling over some of the most relevant and often disturbing issues of the moment. For beyond the generational gap on which it focuses, there is the powerfully suggestive background of Mostar, a Bosnian city that still bears the signs of the Balkan war that tore it apart, with a war memorial that gains additional significance in the subtext of Sallam’s conversations with his Israeli counterparts.

The contact established between adolescents from different backgrounds, all of them apparently cheerful, careless and ebullient, living in a pleasant, protected bubble, cannot hide altogether their concern for the future. The young Israelis realise they have go back home for their military service even if they aren’t that keen on it, while Sallam is still uncertain about his own prospects. And to top it all, hovering over the entire film, is the eternal issue facing every interview-based documentary: to what extent does the presence of a filmmaker and his camera affect the reality it is supposed to document?

In the course of the film, Fisher is taken to task by his son for expecting closeness when a camera always separates them. This, the film intimates, is impossible, even for someone like Yuval, who has grown up under the eye of a camera, let alone the others. And yet, despite his occasional rebellion against his father always looking at him through a lens, it seems that by the end of the film, the experiment has at least partially succeeded, and the gap between them has been diminished.