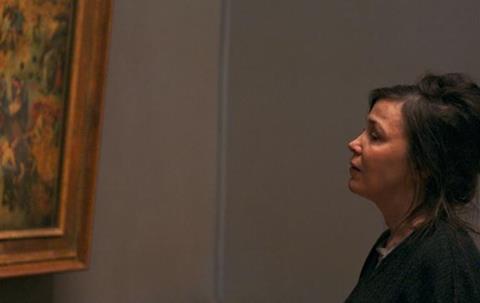 Vienna in winter, a woman dying in a hospital and art being reborn every day anew in one of the world’s greatest museums… all of these may well constitute an intellectual delight for a select minority but doesn’t quite meet the requirements of a feature film or the expectations such a term generates. As such, Jem Cohen’s latest juxtaposition of art and life, which premiered at the Locarno Film Festival, may find its way into extreme specialist niches and other film festivals.

Jem Cohen’s melancholy elegy doesn’t really try to tell a story but rather to create a mood and invite people to reflect.

The plot, since this film pretends to have one, deals with a Canadian woman from Montreal named Anne (Mary Margaret O’Hara) who borrows money to go all the way to Vienna, where a cousin of hers she has not seen for ages lies in a coma with very little chance of ever recovering. To fill up the time between one hospital visit and the next, she roams around town and visits the celebrated Kunsthistorisches Art Museum where she meets Johann (Bruno Sommer), employed there as a guard in the Peter Breughel room, arguably one of the greatest artistic shrines in existence.

Once the natural diffidence between the two strangers evaporates, he offers to help her, whether it is talking with the medical staff at the hospital in German; arranging for a monthly access to the museum where she has the chance to follow some fascinating art lectures for free; helping her find her way through the city, or accompanying her on long walks as they get to know each other better and reveal more of their intimate past (at least in his case, often coinciding with the actor’s own history).

Plot-wise, nothing really happens, except for the paintings in the museum merging with the sights of the streets. As a free lesson in art appreciation is extended to the audience, displaying once again the truth behind the old saying that “art is in the eye of the beholder”, on the condition that the beholder knows how to use his eyes.

Working on the premise that art is life and vice versa, Cohen takes his camera from the museum to the streets of Vienna, focusing one moment on a Breughel painting, ‘Conversion of Paul’, and next on an old woman observed from a distance, walking in real life up a bleak lonely alley, to discuss the actual center of interest these two separate visions offer.

He observes the hands of a dying woman and then at the sculpted hands exhibited in the museum, he has nude visitors admiring nude paintings and there are constant references of the many ways one can look at art, as many as there are to look at life itself. A museum guide (Elsa Piplits) proposing her own interpretation of Breughel’s ‘Country Wedding’, suggests how much there is in an image, any image, if you know how to look at it.

Divided in chapters separated by black frames, Jem Cohen’s melancholy elegy doesn’t really try to tell a story but rather to create a mood and invite people to reflect. But Sommer (who is not a professional actor), in his clear, calm and unhurried manner, manages to make all his points in the best gemutlichkeit Austrian tradition and the introspective moments of Mary Margaret O’Hara wandering on her own in a strange city, are moving. But most persuasive of all is the camera work of Cohen himself and his Austrian ally, Peter Roehsler, which actually does turn real life into art and looks at art as if it is real life. They may have no story to tell, but plenty of things to show.