My Brother The Devil 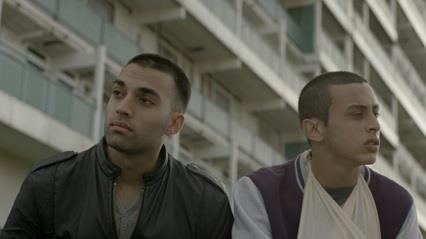 In My Brother The Devil, Sally El Hosaini takes to the streets – the London streets – in her portrait of two Egyptian brothers from an immigrant family who fall into the neighborhood gang culture.

The radiance of My Brother The Devil should also work as an audition tape for Letitia Wright.

Egyptian kids in a London youth gang thriller offer a novel twist on an urban growing pains formula that’s been almost everywhere. Welsh-Egyptian El Hosaini turns unlikely ingredients into luminous cinema which will take the film to festivals worldwide and pile up awards. Still, clever marketing will be needed to bring kids from the illegal download culture into cinemas, where this film should be savoured. The debut is a promising career start for the director and the two appealing leads in the cast.

The two brothers in the title are older Rashid (James Floyd) and Mohammed - or Mo - (Fady Elsayed), who have adopted the street talk and street style of their London peers. As their bus conductor father talks about the Arab Spring, Rashid earns drug money, which he sneaks into his mother’s purse. When Mo discovers the allure of street life, girls, and competing gangs, he yearns to imitate his brother, and things get violent.

In a debut film whose subject is volatility, El Hosaini avoids the kind of over-dramatisation that’s usually unavoidable in this genre. James Floyd is cocksure as the handsome Rashid, who gets sidetracked from street rackets into a job and a gay relationship, but not before a bloody brawl sets him up for a revenge match with a rival gangster. Fady Elsayed plays a kid growing up fast on the street as Mo, ambitious for a reputation among his peers.  Nonprofessionals in the cast keep realism from turning into melodrama.

Yet El Hosaini’s special achievement in My Brother The Devil is the stunning look of the film. Cinematographer David Raedeker was forced by circumstances at the time of filming - the Hackney riots last summer -  into shooting much of the film in interior spaces. His closeups in cinemascope give tight shots an extraordinary radiance and a visual depth in minimal light, an effect that’s entirely unexpected in this kind of movie.

It’s rare to find a first-time film with such an elegance that’s still true to its gritty locations in cramped apartments and nondescript streets.  The contrast of the young cast’s faces against the greyness of Hackney adds to the film’s subtle textures.

The radiance of My Brother The Devil should also work as an audition tape for Letitia Wright, who plays Aisha, a Muslim girl who tries to set Mo straight. Wright’s face is one of many that make El Hosaini’s debut a luminous event.