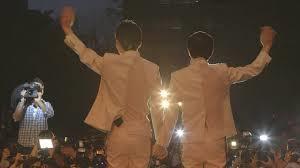 It could be argued that films about gay weddings are fairly common these days, but the story of the delightfully flamboyant and engagingly eccentric plans for the wedding between Kim Jho Gwang-soo and Dave Kim makes for an enjoyably offbeat affair, especially since it is set against the country where homosexual weddings are still not legal.

Their media background adds much to their story and how they decide to declare their commitment to each other.

The documentary, which had its world premiere at the Busan Film Festival, is an enjoyable watchable film and as well as appealing to LGBT festival programmers it may also strike a chord with broadcasters. The fact Kim Jho Gwang-soo and Dave Kim have their own production companies in South Korea could also help interest and accessibility.

Their media background adds much to their story and how they decide to declare their commitment to each other. Opening with footage from 2013 of them shooting a trailer for the film, the production traces the trials and tribulations of taking their relationship and plans to a series of press conferences and announcements as they head towards the big day.

From a pledge ceremony in 2007, via a press conference in May 2013 to formerly announce plans for a wedding ceremony the pair lived their plans very much in the public eye, aware that in truth the notion of a gay wedding in South Korea is still very much a taboo subject. Older groom Kim Jho Gwang-soo just turns 50 and is very much more outspoken on the subject while Dave Kim, some 19 years his junior, is more gently circumspect about their plans but equally committed to their relationship.

As D-Day approaches they prepare themselves (many changes of clothes and even a song’n’dance routine) for the ceremony, to be held on a Seoul bridge. Indeed it turns out to be a ‘noisy’ wedding as they predict - protestors try and disrupt proceeding but they are drowned out by the sense of support and goodwill. The film ends with the coda that the authorities have given notice that the marriage has not been accepted…the couple of planning a legal challenge.