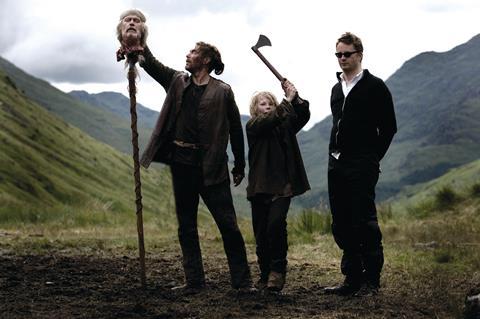 While England — or more specifically London — may still land the lion’s share of international productions, Scotland, Wales and Northern Ireland are striving to make up for lost time.

Scottish Screen, Creative Business Wales and Northern Ireland Screen have remits to foster local talent and charm footloose international productions into showing them the money. Like their regional counterparts in England, all offer services and investment for international productions, including development aid for outside film-makers who team with local producers or talent.

“That we’re willing to invest in projects is attractive in the current climate,” says Carole Sheridan, head of talent and creativity at Scottish Screen, the longest-running of the three national agencies. “Most people will take some soft money if they can get it.”

All boast easy journeys from their production hubs — Glasgow, Edinburgh, Cardiff, Belfast — to breathtaking rural locations, as well as strong infrastructure and crews thanks to the UK’s robust television industry. And the extra carrot is the UK tax credit for which any qualifying British production is eligible.

But outside of the main agencies (see sidebar, p21), there are few financing sources available in the nations and it can be a struggle to get a film made without their backing. In Scotland and Northern Ireland, the regional BBC production arms invest sporadically in films in return for local broadcasting rights, as BBC Scotland has done with Edinburgh premieres Laughter, Wasted and Irish comedy Wide Open Spaces. Welsh-language broadcaster S4C is the majority investor in Marc Evans’ $2.6m (£1.6m) Patagonia.

“People are finding creative ways to get their financing, whether it’s by doing it on a shoestring or regional co-productions,” says Wide Open Spaces producer Clare Kerr. “People just aren’t being put off.”

“We’ve tried to invest strategically over the last couple of years to give the talent a break that we feel strongly is worth supporting,” adds Scottish Screen’s Sheridan.

Eagle takes flight in the Highlands

Producer Duncan Kenworthy says he would like to do a “Lord Of The Rings” for Scotland on Kevin Macdonald’s Roman legion adventure The Eagle Of The Ninth, which starts production in August for Focus Features. “Those locations in New Zealand were a large part of the effect of those films and it could be one reason people go to see our film, to see these extraordinary vistas they have in Scotland,” says Kenworthy.

While he plans to shoot the English-set sequences in Hungary, he was not willing to compromise on the Scottish shoot. “The Highlands are going to be a key character in the film so it would be odd to shoot that somewhere else,” says Kenworthy, who is hoping to secure Scottish support, whether through the tourist board or an agency, to help with locations overheads.

Centurion, backed by Pathé and the UK Film Council Premiere Fund, also used Scotland for extreme mountain filming. “There are views there that could be in the Alps,” says co-producer Robert Jones. “It’s a spectacular landscape, but it was very physically demanding and tough for our cast and crew. Having competent local people who know the area and its dangers was paramount.”

Key players in Wales cite the “Doctor Who effect” as a key factor in becoming a destination hotspot. Thanks to the successful BBC series and its spin-offs, Wales has seasoned crews and improved facilities, and a delegation from the umbrella organisation Creative Business Wales recently went to Los Angeles for meetings with the US studios.

This year Harry Potter And The Deathly Hallows shot in its Pembrokeshire Coast National Park and in the same area Ridley Scott discovered the perfect beach for his Robin Hood project. The Imagine/Universal Pictures production is shooting in Wales for two weeks in June, with Warner Bros’ Clash Of The Titans set to follow this summer.

Joining the Hollywood behemoths will be comedy Barafundle Bay, from Welsh-born writer-producer Vaughan Sivell of Western Edge Pictures. With Film Agency Wales development and production funding some $290,000
(£180,000) of the project’s $1.6m (£1m) budget, Sivell and director Hattie Dalton have attracted Rupert Friend and Tom Hardy to the cast and are due to shoot in July.

Film Agency Wales focuses on nurturing local talent and fostering Welsh identity. “We don’t mind too much where projects are set or what the spend in Wales is,” says chief executive Pauline Burt. “We’re a talent fund. We’re trying to find the new blood.”

A series of steps has helped to put Northern Ireland on the locations map.

Gilbert was also instrumental in making Belfast studio The Paint Hall operational. The four-stage facility in the city’s former shipbuilding quarter enticed Walden Media and Playtone Productions’ City Of Ember two years ago, while Universal Pictures’ medieval fantasy Your Highness has just taken it over for a four-month shoot, to be followed by an HBO fantasy series pilot A Game Of Thrones.

“The Paint Hall is an accidental asset coming out of the shipbuilding industry,” says Northern Ireland Screen (NIS) chief executive Richard Williams, who went out to Los Angeles as part of a government delegation to seal the Your Highness deal with Universal. Both Your Highness and Thrones will receive the maximum funding award of $1.3m (£800,000) each. NIS has a three-year lease on The Paint Hall, renewable in 2010.

Generator has already made three films: genre titles Red Mist and Ghost Machine, and Cherrybomb, which premiered in Berlin. A further three are due to go into production this year.

Williams admits the province can only accommodate one major production at a time. “But that doesn’t concern me,” he says. “We’ll be very happy to sustain The Paint Hall with one big project a year. City Of Ember delivered $16m (£10m) to the economy, Your Highness will deliver more, and the number of local heads of department has greatly increased.”