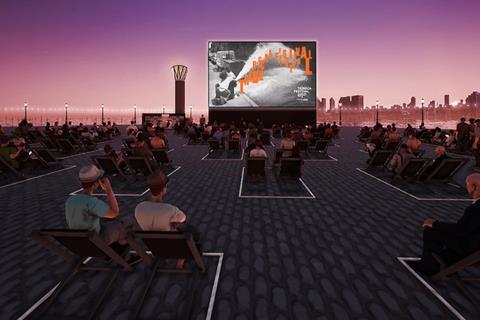 2021 Tribeca Festival is scheduled to take place this year as an outdoor 20th anniversary event from June 9-20.

The multi-screen, Covid protocol-compliant festival will span all New York boroughs and is the culmination of New York state’s NY PopsUp initiative to bring back live entertainment after more than a year of closures due to the pandemic.

The following venues have been confirmed to take part: Brookfield Place New York, Pier 57 Rooftop, The Battery, Hudson Yards in Manhattan; Empire Outlets in Staten Island, and The MetroTech Commons in Brooklyn.

The line-up will feature films, immersive exhibitions, games, concerts and a commemoration of the Juneteenth holiday, which will fall on closing night for the first time. Signature screenings including opening and closing night selections will be announced at a later date.

“Tribeca is a community of the most resilient and talented storytellers on the planet,” added Jane Rosenthal, co-founder and CEO of Tribeca Enterprises and Tribeca Film Festival.

“In 20 years, our community of creators and partners have become a family. This summer we are excited to reunite as Tribeca becomes a centerpiece of live entertainment in neighborhoods across New York City.”