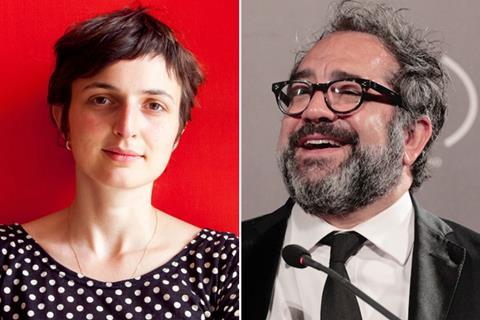 Italian filmmaker Alice Rohrwacher and Mexican Academy Award-winning production designer Eugenio Caballero have been confirmed as the final two masters at the fifth edition of the Doha Film Institute’s Qumra event, which runs March 15-20 this year.

Caballero’s 30-plus film credits include Jim Jarmusch’s The Limit Of Control, Baz Lurhmann’s Romeo + Juliet and Alfonso Cuarón’s ROMA. Rohrwacher won the grand jury prize at the 2014 Cannes Film Festival and best screenplay for Happy As Lazzaro in 2018.

“They have distinctive bodies of work that distinguish them for their unique creative voice and cinematic expertise and we look forward to engaging interactions between them and the participating filmmakers,” said DFI CEO Fatma Hassan Alremaihi.

Launched in 2015, Qumra develops emerging filmmaking talent, with a focus on first and second-time directors. This year’s edition will host directors and producers connected to 36 projects, at different stages of production, from 19 countries.

They will participate in the masterclasses as well as a programme of seminars and one-on-ones with top industry professionals, tailor-made for their project.

This year, 15 of the projects are by Qatar-based talent. They include AJ Al-Thani’s Khuzama and Hend Fakhroo’s Behind Closed Doors which are in development.

Hamida Issa’s documentary Places Of The Soul, about the first Qatari woman to travel on an environmental expedition to Antarctica, will also be presented in the post-production section. It is the first ever Qatari feature at Qumra in this section.

Qumra 2019 projects (all details provided by the DFI)

After an eco-apocalypse, the dying founder of a vast underground orchard passes on instructions to her younger successor who was born underground, making her a stranger to the place she is destined to rebuild.

Four estranged and offbeat sisters are forced to come together to find their suddenly-missing father. However, they are already at their wits’ end.

An aspiring but depressed writer from Haifa befriends his new neighbour in an attempt to convince the man to help him commit suicide.

Sarah, a Belgian woman of Moroccan descent, adopts a little girl in Morocco. But when the Belgian authorities deny her child’s visa, it is the beginning of an arduous ordeal for both of them.

Based on true events. Two teenage shepherds are captured on a Tunisian mountainside by jihadists. Decapitating the eldest, the 14-year-old sheepherder must return his cousin’s head to the victim’s mother.

A boy goes through a psychological change process to discover the reasons behind the divorce of his parents.

Six year old Leila wakes up one day and finds her mother gone with only her father to take care of her. After weeks of struggling, the small family settles into an emotional equilibrium, only to have the mother suddenly return.

Set against the harsh desert backdrop, a Bedouin girl is thrown into a world of turmoil and violence which she can only survive with the help of a group of nomadic women.

Hanane, a young woman from a modest village in Marrakech decides to enter the traditionally male-only festival of battle bravery, Fantasia. Assembling her own troupe of horsewomen, she must face the prejudices of a patriarchal society.

In a 3 stars hotel converted into a reception centre for political refugees, waiting bodies are looking to cross the France-Italy border. The film follows this moving and suspended image to understand a contemporary story about movement, exile and space.

Returning to her father’s house in the radicalised city of Tripoli, Farah realises that the only way to connect with him is by joining his male-dominated poetry club.

Prisca, Gift, and Jenny fled their home countries in Africa in the hope of a better life in Europe. A migratory odyssey fraught with violence, smugglers, and closed borders, where the three women attempt to reach their ‘El Dorado’ at any price.

Qatar is one of the richest, most aspirational, and most scrutinized countries in the world. What is it like to grow up as a girl in this rapidly changing, majority-Muslim nation; that is a clash of tradition and modernity? For the Olympic Stars, a rhythmic gymnastics team for girls aged 9-15, it offers empowerment opportunities their mothers never had.

Algeria, March 1994. Childhood friends S. and Lotfi travel through the Algerian desert looking for Abou Leila, a dangerous terrorist on the run.

Painted frame by frame, ‘Bombay Rose’ is an animated love story set on the streets of Bombay.

Nedjma refuses to submit to fear during the Algerian Civil War by fulfilling her dream of putting on a fashion show.

Noura struggles to raise her three children alone while her husband is in jail – until she meets Lassaad. Their plans to be together, however, are jeopardised by the impending release of her husband, and the two decide to flee.

A child’s spiritual and magical quest for his disappeared mother in a small town racked between the army and drug traffickers.

The lie of a teenage girl destroys the world of her elder sister. Struggling to regain her sister’s trust, she finds out the truth about their mother.

After years in captivity, a thief returns to retrieve the money he stole and discovers a mausoleum unexpectedly built on the site where he stashed the money.

Children Of The Famine

Between 1915 and 1918, an estimated 200,000 people died from hunger in Mount Lebanon. For them, there is no memorial. Few photos remain, and ruins emerge from oblivion.

A group of female doctors establish a subterranean hospital in order to save the lives of victims of chemical and conventional weapons during the Syrian civil war.

Born and raised in Iran, four Afghan musicians risk a dangerous journey from Iran to Afghanistan to make a dream come true—their first rock concert in their war-torn motherland.

“Froth” tells the story of three people living on the coast of the Barents Sea who are united by an incredible blend of humility, inherent rebelliousness, a very specific moral code, and their attitude towards life.

Places Of The Soul

A Qatari woman travels on an environmental expedition to Antarctica in search of hope for a sustainable future before returning to Qatar in search of inspiration to make positive change.

She grew up in a land of dictators and surveillance. Today, from her exile, she is reclaiming the images and sounds of Syrians, half of whom are scattered around the world.

Msa7ar (Qatar) by Hassan Al-Jahni- Fatima seeks to capture the local Msa7ar (em-sa-har) to wake up her dying grandmother, but can she overcome her fear of the dark in order to save her grandma?

Border (Qatar/ Fall Grants 2018) by Khalifa Al-Thani- ‘Border’ is the story of a Middle Eastern man who wants to cross the border back into his country, but bypassing the security becomes a near impossible journey.

J’ai Le Cafard (Kuwait, UK, Qatar) by Maysaa Al Mumin- In a demanding corporate office, forty-two-year-old Maryam develops a relationship with a cockroach that becomes both her saving grace and cause for angst.

Al-Azza (Sudan, Qatar) by Eman Mirghani- Following the death of her estranged mother, Arwa returns to her childhood home. There she must comply with religious traditions and wash her mother’s body before burial—setting in motion events which will make her question her identity and why she ran away from home.

6 Months And 1 Day (France, Morocco, Qatar) by Yassine Ouahrani- After his pension gets withheld, Aziz—an old retired immigrant, must confront his landlord at the risk of losing his home.

End Of The Road (Qatar/ Qatari Film Fund 2017) by Ahmed Al-Sharif- When a mysterious old man appears on the side of the road, Munir, an honest and God-fearing taxi driver, must make a choice on the night of his daughter’s birthday. His decision will shape his faith in humanity forever.

The Black Veil (Qatar/ Spring Grants 2017) by A.J. Al-Thani- Many women around the world suffer under oppression and dream of escaping it. ‘The Black Veil’ is the story of one woman who puts her life at risk in order to find her freedom.

Beit Byoot (Palestine, Qatar/ Fall Grants 2017) by Mayar Hamdan- Jameela, a friendly little girl, wants nothing more than to fit in with two carbon copy mean girls. But when she meets odd Yasmine, she must choose between conformity and being herself.

Paper Plane (Egypt, Qatar) by Nada Bedair- In a strict Catholic school, a new girl, Zayn, prompts her classmate Noor to make her dream kite. As both twelve-year-old girls embark on a kite-making mission, they soon find themselves in trouble with the school nuns.

In The Middle (Yemen, Russia, Qatar) by Mariam Al-Dhubhani- Forced to pick up arms, Ali is stranded between his crushed dreams and the harsh reality of Aden— a city torn apart by the ongoing war in Yemen.