The 2018 edition of André Rieu’s Maastricht Concert, ’Amore’, has seen the virtuoso Dutch violinist once again break his own record for a live concert cinema release in the UK. 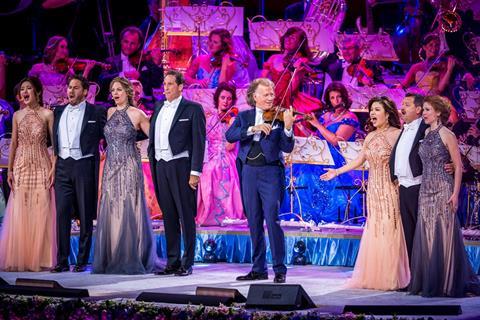 Playing in more than 500 locations across the UK and Ireland the weekend of July 28-29, with encores the following weekend, the film took £1.67m. That makes it the top grossing concert event cinema release of all time, and also the tenth highest-grossing event cinema release in the country (excluding Secret Cinema).

The release is now handled by Piece of Magic Entertainment, the company launched by Rieu with Pierre Rieu and Caspar Nadaud last year.

On its opening weekend, the film debuted fifth in the UK box office chart, behind the likes of Mission: Impossible – Fallout and Mamma Mia.