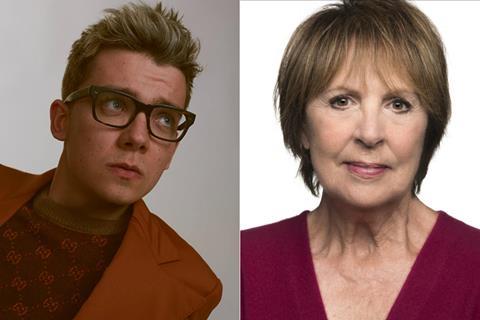 The film is aiming to shoot in September this year, providing the Covid-19 restrictions allow it. Shooting locations are near the M25 in England, and in Wales, including Aberystwyth, an important location to the story.

Katie Dolan is producing for her and Gardner’s UK company Cosmik Pictures; talks with independent financiers and producers are ongoing.

The film is a black comedy about two estranged elderly sisters who reconnect on a no-holds-barred bender that goes awry. Wilton plays one of the sisters, with Butterfield as the aspiring young rapper who lives next door to one of them.

Gardner’s debut feature Jellyfish launched at Tribeca in 2018, with Screen Star of Tomorrow Liv Hill winning best performance in a British feature at Edinburgh that year.

Dolan has been executive producer on videos for and about music artists including Billie Eilish, Dua Lipa, David Bowie, Elton John, and Coldplay. She was production coordinator on the London shoot of Wes Anderson’s The Grand Budapest Hotel.

Butterfield stars in Netflix hit series Sex Education which hopes to shoot its third season in Wales this summer when Covid-19 restrictions allow it.

Wilton has recently had key roles in TV series Downton Abbey and Ricky Gervais’ After Life and, as well as features including Craig Roberts’ Eternal Beauty and Jessica Swale’s Summerland.