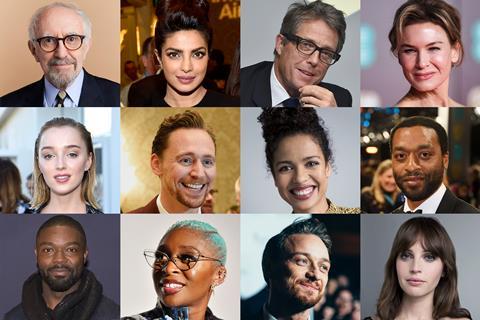 A selection of the Bafta 2021 Film Awards hosts

Bafta has further outlined the format for this weekend’s two-night film awards ceremony, with presenters joining the show in-person from both London and Los Angeles, and a joint musical performance between the two cities.

As well as a virtual audience, all nominees will join the show virtually, thereby removing the need for nominees to travel to London or the Los Angeles studio.

Tom Hiddleston, Hugh Grant, Felicity Jones and Priyanka Chopra Jonas are among the presenters who will appear from the Royal Albert Hall, London on the main ceremony on Sunday 11.

Leslie Odom Jr., a supporting actor nominee for his role as US singer Sam Cooke in One Night In Miami…, will perform tracks from the film on both nights of the show from LA. On the Saturday night he will perform ‘Speak Now’; while on the Sunday show he will sing a duet of ‘A Change Is Gonna Come’ alongside UK singer Corinne Bailey Rae, who is in London.

UK artist Celeste will also perform ‘Hear My Voice’ from The Trial Of The Chicago 7 on the Sunday show. The event will be preceded by an augmented reality music performance from singer and former One Direction member Liam Payne, which will play through mobile handsets at 6.45pm BST before being incorporated as the opening performance of the BBC One show from 7pm.

Bafta president the Duke of Cambridge will participate in both nights of the show. For the Saturday event he will speak with three-time Bafta winning costume designer Jenny Beavan and make up and hair designer Sharon Martin on filming in lockdown and the craft of filmmaking; while in the Sunday show he will give a speech via video which Bafta says will ‘celebrate the resilience of the industry over the past year’.

As previously announced, the ceremony will be hosted by Clara Amfo on the Saturday evening; and by Edith Bowman and Dermot O’Leary on the Sunday. Yesterday Taiwanese director Ang Lee was announced as the recipient of this year’s Bafta fellowship, which he will receive virtually.