CMG's AFM line-up to include horror thriller 'The Shed' (exclusive) 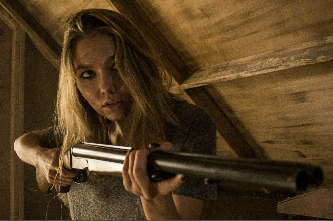 Edward Noeltner’s LA-based Cinema Management Group (CMG) has boarded sales on horror thriller The Shed from A Bigger Boat Productions as part of its slate for the upcoming AFM.

New titles include Lez Bomb starring Cloris Leachman and Bruce Dern, who just replaced the late Burt Reynolds on Quentin Tarantino’s Once Upon A Time In Hollywood, and Locarno premiere Hide & Seek.

Frank Sabatella directs the feature from A Bigger Boat in association with in Wing & A Prayer Pictures about an orphaned teenager living with his abusive grandfather who routinely protects his best friend from school bullies.

When the youngster discovers a murderous creature has taken refuge in his backyard toolshed he tries to battle the demon alone, while his bullied friend believes it could solve his problems if they can lure the bullies to the shed. Timothy Bottoms, Frank Whaley and Siobhan Fallon stars alongside Jay Jay Warren, Cody Kostro and Sofia Happonen.

“Frank Sabatella and I wanted to take a conventional horror set-up and use it to comment on current anti-bullying discussions, as well as to use a horror creature as a metaphor for the extreme outcomes that occur when the bullied are pushed too far,” said Block, a genre veteran who was one of the guiding lights and executive producer on the Saw franchise.

Block added, “We are thrilled with the fabulous tension we were able to get on set and look forward to finishing up the film for release next year.” Block and Neal previously collaborated on the thriller Frozen.

Noeltner added, “From the awesome footage we’ve seen, I think we’ve got a real winner here and are excited to be putting together a promo for buyers at the AFM.”

Comedy of errors Lez Bomb is written, directed by, and stars Jenna Laurenzo, and tells of a young woman who returns home for Thanksgiving prepared to reveal a bombshell. Little does she know, the eccentric cast of characters that make up her extended family have their own surprises. Starring alongside Leachman and Dern are Kevin Pollak, Kevin Kane, and Steve Guttenberg.

The story follows a married couple of 20 years who have lost their spark when the woman (Rebecca Indermaur) receives unusual advice from the village’s new priest (Murali Perumal), only to discover her husband (Bruno Cathomas) has been having an affair with her best friend, Giulia (Tonia Maria Zindel). Christoph Schaub directed.