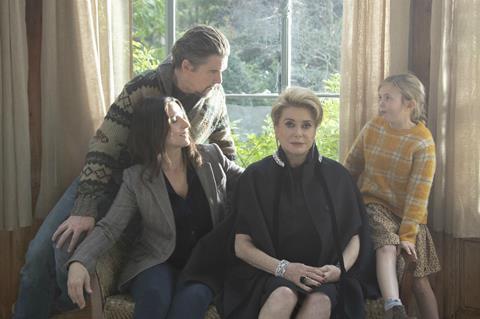 Hirokazu Kore-Eda’s English and French-language drama The Truth was the most-streamed title on Curzon Home Cinema (CHC) last weekend (March 20-22) according to a top 10 of the most-viewed titles revealed by by the UK platform.

The Truth was set for theatrical release on March 20 via Curzon’s distribution arm but pivoted to an early digital release in the wake of cinema closures. Its release beat the previous best three-day figure on the platform by 66%. No further details of the numbers involved were given.

Celine Sciamma’s Portrait Of A Lady On Fire, Levan Akin’s Georgian And Then We Danced, Agnieszka Holland’s Mr Jones, and J-P Valkeapaa’s Dogs Don’t Wear Pants comprised the rest of CHC’s top five for the weekend.

CHC reported record figures for the weekend as audiences flocked online to watch films during the coronavirus lockdown with its gross income rising 347% compared to the same three-day period in 2019. Most cinemas had closed their doors by Thursday and the UK government ordered all venues to shutter operations by end of business on Friday in a bid to stem the spread of Covid-19.

The streaming service has also doubled its selection of films solely available to Curzon members from 12 to 24 in a bid to better serve them during the closures. Curzon was forced to clos its 13 venues on March 19 following government advice and all staff have taken a short-term pay cut in an effort to avoid redundancies.

CHC now plans to roll out further initiatives “to keep the magic of the collective viewing experience alive in this time where theatres are closed” said Curzon CEO Philip Knatchbull.

These could include an initiative to stream a series of director Q&As from their own isolation. “We’re discussing options with a number of our beloved directors,” said Knatchbull.

UK-based MUBI, which acts as both an international streaming platform and distributor, has also seen figures rise during the pandemic.

Subscribers rose 24% in the UK and 34% in Ireland across the week beginning March 16. Italy, which has been hardest hit by the virus, saw subscribers grow 52% in the same period. Views rose nearly 50% on the previous week.

As a distributor, MUBI has also had to shift its strategy following cinema closures. Its Cannes jury prize-winner Bacurau is receiving an early digital release as a result.

While the British Film Institute would not reveal figures for its streaming platform, BFI Player, it did share the most-watched titles of the last seven days