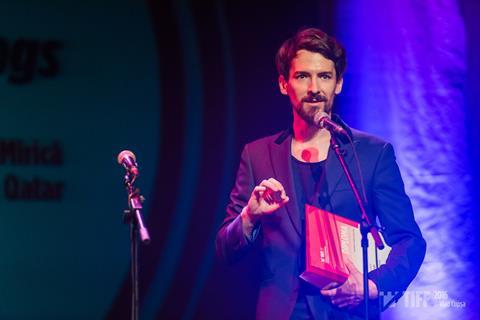 The thriller about a young man from the big city coming to a remote village to sell the land he inherited from his grandfather had its world premiere in the Un Certain Regard section in Cannes last month and is being handled internationally by Bac Films International.

The co-production between Marcela Ursu’s 42 KM Film, French producer Elie Meirovitz’s EZ Films and Bulgaria’s Stephan Komanderev’s Argo Film is the fourth Romanian film to win the top prize in Cluj-Napoca after Cristian Mungiu’s Occident at the first edition of TIFF in 2002, followed by two films by Corneliu Porumboiu (12:08 East of Bucharest and Police, Adjective).

The competition jury including the Berlinale’s Wieland Speck, artistic director of the Cleveland International Film Festival Bill Guentzler and the Polish director Tomasz Wasilewski gave the Best Directing Award to Israel’s Avishai Sivan for Tikkun and the Special Jury Award to the Icelandic filmmaker Rúnar Rúnarsson for Sparrows.

The jury’s Best Performance Award was presented to David D’Ingeo for his role as a French crossdresser living in the backstreets of Cambodia’s Phnom Penh in Nathan Nicholovitch’s Where There is Shade, while a special mention was made of the two young actors, Monika Naydenova and Alexander Benev, for their performances in Svetla Tsotsorkova’s Thirst.

The FIPRESCI Prize was awarded to Gabriel Mascaro’s Neon Bull, while the festival’s audience voted Marina Seresesky’s Madrid-set tragicomedy La Puerta Abierta as the winner of this year’s Audience Award, and director Cristi Puiu was presented with the Transilvania 15 Trophy in recognition of his support of the festival over the years.

The festival’s closing gala in Cluj-Napoca’s historic National Theatre also saw the Mercedes Benz Excellence Award being presented to the locally born actress Carmen Galin and a Lifetime Achievement Award for Lujza Orosz, a famed actress of the Hungarian State Theatre in Cluj-Napoca.

Accepting TIFF’s Special Award for the Contribution to the World Cinema, Scottish-born producer Iain Smith said that “the work of a producer is rarely understood, never mind awarded, so to receive this award is a huge honour for me.“

He recalled that shooting Anthony Minghella’s Cold Mountain in Romania was “one of the happiest filmmaking experiences I ever had“ and that coming to TIFF was like “home from home“.

“I know that Romania suffers like many other countries do from the lack of money and lack of cinemas, but one thing you do have - and that is the enormous talent and creativity,” Smith added.

As to be expected, the evening’s highlight was the presentation of the Lifetime Achievement Award to the acting legend Sophia Loren who announced on stage – much to the surprise (and delight) of festival director Tudor Giurgiu – that she intends to return again for the festival next year.

Both winners will also have an opportunity to present their projects during the Industry Days in Locarno in August.