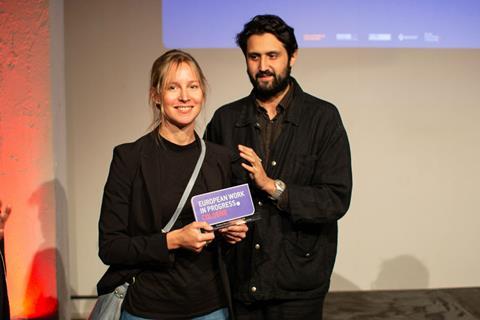 End Of Season, the debut feature from Azerbaijan director Elmar Ivanov, won the main award of €20,000 ($23,000)  in post-production services from MMC Film & TV Studios, at the first edition of the new market platform European Work in Progress (EWIP), part of the Film Festival Cologne on Tuesday (October 11).

¨We really need this prize!¨ said Ivanov, who had shot the film about a family drama over 24 hours on location in his native Azerbaijan a year ago.

He and his partner Eva Blondiau of their company Color of May had presented footage at EWIP to find support for the film’s sound design, colour correction and VFX as well as generate interest among sales agents, distributors and festivals.

Taste of Pho is the €1.5m ($1.7m) feature debut of Japan-born Mariko Bobrik, a graduate of the Polish National Film School. The project had previously participated in Cannes’ Résidence du Festival, and the Berlinale Talents’ Script Station. It is being sold internationally by New Europe Film Sales.

Weber  revealed the co-production between Marcello’s company Avventurosa, Match Factory Productions and France’s Shellac Sud is being shot on Super 16.

In addition, the €4,000 ($4,600) EWIP Eclair Award for the subtilting of a film in two languages was awarded to France’s Stéphane Demoustier for his courtroom drama Unconditional (La Fille au Bracelet), starring Roschdy Zem, Chiara Mastroianni and Melissa Guers. The €3.3m ($3.8m) France-Belgium co-production is produced by Jean des Forets of Paris-based Petit Film. It will be released in France by Le Pacte and handled internationally by Charades.

A line-up of 22 projects with crossover market potential for European and international arthouse audiences were showcased at the initiative’s first edition.

Meanwhile, a closer collaboration between the film industries in North Rhine-Westphalia (NRW) and their neighbours to the north in the Netherlandsis being forged. according to Bero Beyer, festival director of the International Rotterdall Film Festival. It followed an EAVE exchange panel called ‘Effective Exploitation Strategies for European Arthouse Cinema Productions’,

¨There used to be a good tradition for co-production between North Rhine-Westphalia and the Netherlands and that seemed to be in need of a new impulse,¨ noted Beyer.  who was a producer before becoming festival director at Rotterdam. ¨We want to see how our two festivals can help encourage more co-productions and then give them a better visibility at our events and elsewhere.¨