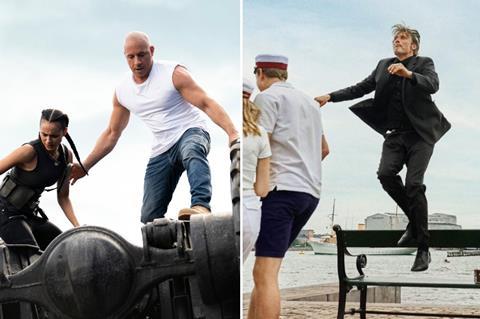 ‘Fast and Furious 9’, ‘Another Round’

Fast And Furious 9 comfortably held its lead at the UK and Ireland box office over the weekend (July 2-4) and will top £11m in the territory this week.

It remained far ahead of the competition, with no other title topping £1m across the weekend. Saturday evening also saw more than 26 million people watch England’s win over Ukraine in the Euro 2020 quarter-finals.

Universal also released Christopher Landon’s body-swap horror-comedy Freaky, starring Kathryn Newton and Vince Vaughn, which had faced repeated delays due to the pandemic. The film ranked sixth overall on its opening weekend, taking £335,966 from 523 locations for an average of £644.

Studiocanal scored success with the release of Thomas Vinterberg’s comedy-drama Another Round. The Oscar-winning Danish feature, starring Mads Mikkelsen, took £128,674 across the weekend and ranked ninth.

This may appear small beer compared to the studio blockbusters but this gross came from just 130 locations – the smallest roll-out by far of any film in the top 10. With a cume of £205,266, including previews, this marks a location average of £1,579 – more than any other film across the weekend with the exception of Fast 9.

Back up top, Peter Rabbit 2: The Runaway held second place and continued to perform strongly for Sony, holding its takings exactly on its seventh session with £830,560 and £17.4m cume from 627 locations. It remains the highest-grossing film in the territory since cinemas were allowed to reopen in the UK on May 17, while understandably still far short of the £41.1m of first film in 2018 due to pandemic restrictions – due to be lifted on July 19.

Also newly released over the weekend was Signature Entertainment’s Australian animation Daisy Quokka: World’s Scariest Animal. Directed by Ricard Cussó with a voice cast including Angourie Rice and Sam Neill, the film took £52,780 from 376 locations on its opening weekend.

It was topped by Altitude’s animated release Dogtanian And The Three Muskehounds, which added £77,792 from 470 locations on its second outing for a £319,391 cume.

Modern Films opened documentary Lady Boss: The Jackie Collins Story in eight locations, taking £9,228 including an event screening on Thursday. With previews, the cume stands at £12,218 after the first weekend.

Doc ‘N’ Roll Films released Mark Archer’s music documentary Don’t Go Gentle: A Film About IDLES in 35 locations, about the Bristol punk band and its place in the socio-political environment. It took £5,500 over the weekend and has an £11,074 cume.