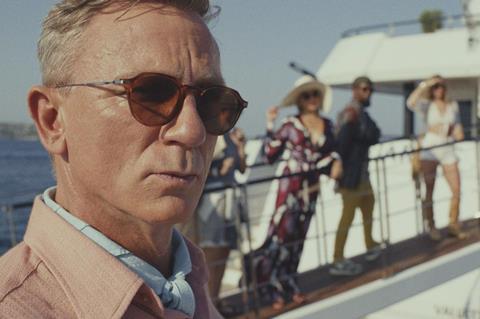 The selection means Netflix is behind both the opening and closing films of this year’s festival. The streamer has worldwide rights excluding UK and Ireland to festival opener Roald Dahl’s Matilda The Musical; Sony Pictures UK and Tristar Pictures are releasing theatrically in the UK and Ireland.

The film will arrive at London from a world premiere at Toronto International Film Festival in September.

Glass Onion sees Craig reprise the role of master sleuth Benoit Blanc, who travels to Greece to peel back the layers of a mystery involving a new cast of colourful suspects. It is produced by Johnson and Bergman for their company T-Street.

Netflix bought the rights to two further Knives Out titles in March 2021, in a deal reported to be worth over $400m.

Johnson called the closing slot “an honour”, adding “a proper whodunnit really does belong in London, so it feels a bit like coming home!”

The first Knives Out film played at LFF in 2019, having also debuted at Toronto, and went on to an Oscar nomination for best adapted screenplay.

LFF festival director Tricia Tuttle described the sequel as “entertaining and culturally literate in equal measure, making some hilarious, razor-sharp observations about the world we live in.”

The selection continues a strong Netflix link for LFF, which opened last year’s festival with Jeymes Samuel’s western The Harder They Fall and closed the 2019 festival with Martin Scorsese’s The Irishman – both Netflix titles.

The LFF programme launch for 2022 takes place on Thursday, September 1.