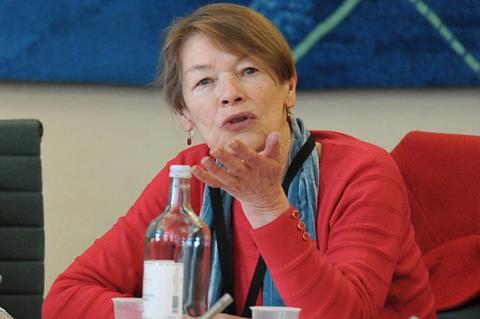 She was presented the award in a private ceremony on May 11 by Josh O’Connor, her co-star in Eva Husson’s upcoming Mothering Sunday.

The award is given to an actor or actress who has contributed significantly to British films throughout their career. Previous recipients include Judi Dench, Vanessa Redgrave, Chiwetel Ejiofor, Daniel Day-Lewis and most recently Kristin Scott Thomas in 2019.

Jackson won the 1971 Oscar for best actress for her leading role as artist Gudrun Brangwen in Ken Russell’s Women In Love. Following further acclaim for The Music Lovers and another Oscar nomination for Sunday Bloody Sunday in 1972, she won her second best actress Oscar for A Touch Of Class in 1974.

A career change in 1992 saw Jackson retire from acting and successfully stand for election as a UK member of parliament for Hampstead and Highgate in London, for the Labour Party.

Jackson held this position until stepping down at the 2015 general election; at which point she returned to acting, appearing in the title role in a West End production of King Lear in 2016 and winning a leading actress Bafta award for 2019 TV film Elizabeth Is Missing.

“Glenda Jackson is a pioneer of stage and screen whose choice of roles has often challenged and changed the narrative around both class and female representation,” said a BIFA statement.

“I was very surprised to receive this award; it’s very kind of BIFA!” said Jackson.