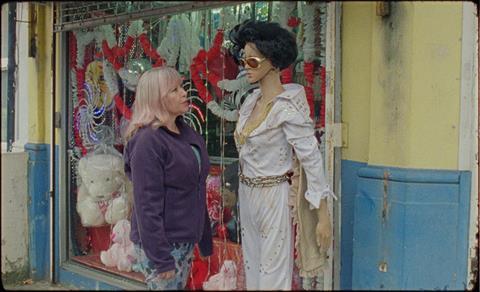 Screen can reveal a first look at the film, above. HanWay will debut it to buyers with first footage at next month’s online European Film Market (February 10-17).

The film is produced by Scott O’Donnell and Tim Nash for UK-US firm Somesuch, with 2015 Screen Star of Tomorrow Andy Brunskill through his SUMS Film & Media.

BBC Film is backing the project by Leigh, who is the son of renowned UK director Mke Leigh.

Sweet Sue wrapped production in December 2021. The film had an extended rehearsal process where Leigh worked closely with the actors to develop the script and characters, echoing the techniques of his father.

The comedy-drama follows a middle-aged woman who meets a mysterious biker at her brother’s funeral, and sparks fly between the pair. She then finds herself in an increasingly surreal battle of wills with his ambitious social-media influencer son, who is convinced that his dance troupe Electric Destiny is tipped for stardom.

“Sweet Sue is a timely human story about life choices, love and everyday struggles that will resonate with buyers across the world looking for a British film with a big heart,” suggested Gabrielle Stewart, managing director of HanWay Fims.