Harvey Weinstein trial halted for day after accuser breaks down 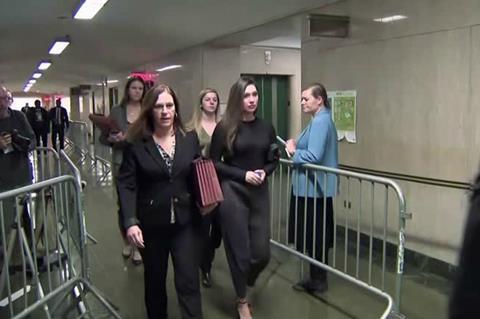 Jessica Mann arrives at court in New York on Friday.

The Harvey Weinstein trial was suspended for the rest of Monday (February 3) after accuser Jessica Mann broke down as she was asked to read an email in which she described the former Hollywood mogul as a “pseudo father” figure after an alleged attack.

Mann, 34, began weeping uncontrollably as she read the May 2014 email aloud under cross-examination by one of Weinstein’s lawyers, Donna Rotunno. She was still crying after a brief break, prompting Justice James Burke to end testimony for the day at New York State Supreme Court in Manhattan.

Mann had testified on Friday that Weinstein raped her in a Manhattan hotel room in March 2013, early in what she described as an “extremely degrading” relationship with him. She said the relationship continued in some form for years after that.

Mann wrote in the email to an actor she had been dating at the time that she was working through “father issues” when she was with Weinstein.

“Harvey was my father’s age and he gave me all the validation I needed,” she wrote.

Mann is expected to be cross-examined further on Tuesday.

Earlier in Mann’s cross-examination, Rotunno repeatedly suggested that Mann willingly had sex with Weinstein to advance her career. At one point she asked whether Mann “manipulated” Weinstein when she sent him friendly messages and asked to see him, even though she was not attracted to him.

“How I handled it to survive and process it, yeah, I guess you could say manipulation,” Mann answered.

Rotunno also questioned Mann about the day of the alleged rape, quoting testimony she gave on Friday in which she said her “worst nightmare” would be for her friend and her agent to see her coming out of a hotel room with Weinstein.

“Your worst nightmare, Jessica, in your words, was not the fact that you had just been taken against your will in a hotel,” Rotunno said. “Your words.”

Rotunno went on to show Mann friendly emails she sent Weinstein after the alleged rape, including one in which she gave him her new contact information and said she would be “happy to see your smile.”

Mann said she sent Weinstein flattering messages to avoid making him angry and show she was “not a threat.”

Weinstein, 67, faces five felony counts including rape and sexual assault against Mann and Mimi Haleyi. He has pleaded not guilty and faces life in prison if found guilty.