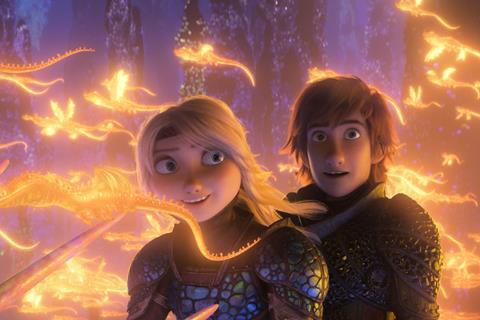 How To Train Your Dragon: The Hidden World, the third instalment in the animated famly franchise from Dreamworks, opened with £5.3m from Friday to Sunday from 555 locations. That’s a location average of £9,500.

The number tops its two predecessors, which opened with £4.8m in April 2010 and £2.6m in June 2016 respectively. How To Train Your Dragon 2 ended its UK run with £25.5m, which remains the highest watermark for the franchise to date.

Green Book, Peter Farrelly’s film which is up for five Oscars this year including best picture, grossed £1.2m on its opening three-day weekend  for a site average of £2,200. With previews of £446,028, the film posted a total opening of £1.7m from 557 sites.

Viggo Mortensen and Mahershala Ali star in the story of a working-class Italian-American bouncer who becomes the driver of an African-American classical pianist on a tour through the American South in the 1960s.

Can You Ever Forgive Me?, Marielle Heller’s film starring Melissa McCarthy and Richard E. Grant in the story of a writer who, after struggling to get published, turns to deception, opened with a £413,907 this weekend from 257 sites for a site average of £1,167. With previews, the film took £510,435.

Last Tuesday (Jan 29), an encore screening of the event cinema release of popular musical Everybody’s Talking About Jamie, grossed £219,562 and is up to a lifetime of £951,931

Lee Chang-dong’s Burning, which premiered In Competition at Cannes last year, opened with £39,562 from 34 locations this weekend for an average of £1,163.

Hit climbing documentary Free Solo is up to £1.6m in the UK after posting a further £39,298 in its eighth weekend.