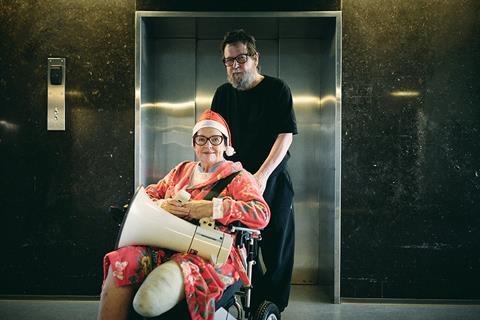 Several members of the original cast of Lars von Trier’s hospital series The Kingdom have returned for the third season, including Danish actors Ghita Nørby, Peter Mygind and Søren Pilmark.

They are joined by actors new to the series, Nicolas Bro (Riders Of Justice), who plays a hospital porter named Balder; and Bodil Jørgensen, who will play a sleepwalker named Karen. The latter worked with von Trier on The Idiots.

The third and final season of the famed TV show, entitled The Kingdom Exodus, is shooting now on location in Copenhagen and in a studio until the end of summer.

The series looks at good and evil at Copenhagen’s leading hospital, Rigshospitalet. Jørgensen takes on one of the leading roles as the sleepwalker Karen seeks answers to the unresolved questions of the series in order to save the hospital from doom.

Nørby returns to her role as anesthesiologist Rigmor Mortensen, who is now a patient in the hospital. Mygind played a spoiled medical student in the first season. Pilmark reprises his role as cynical resident doctor Krogsgaard, nicknamed The Hook.

The rest of the large ensemble cast - including international talent - will be announced over coming months.

Lars von Trier has written the script in collaboration with Niels Vørsel, with whom he also wrote the previous seasons. Louise Vesth produces for Zentropa Entertainments.

Partners for the 5 x 60’ project also include NENT (the season will be a Viaplay Original) and public broadcaster DR. Co-producers are Film I Väst, Zentropa Sweden and Ginger Pictures, with support from Nordisk Film & TV Fond, Creative Europe/MEDIA and tax shelter provided by BNP Paribas Fortis Film Finance.

The first two seasons of the show (originally aired in 1994 and 1997), are being restored by Zentropa so that all three can be launched on Viaplay in 2022.