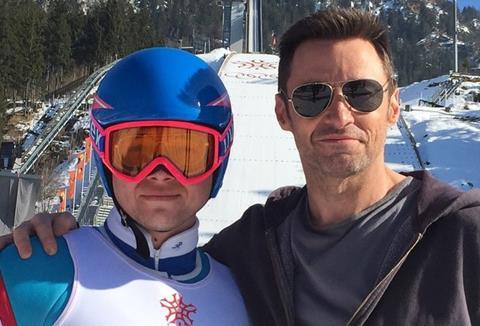 Lionsgate UK has struck a deal with Matthew Vaughn’s Marv Films for rights to Eddie the Eagle, the biopic of British ski jumper Michael Edwards.

Hugh Jackman and Taron Egerton star in the biopic directed by Dexter Fletcher, which has just started production in the Alps and moves to the UK next month.

Lionsgate plans to release the film in the UK in Spring 2016. It will be distributed by 20th Century Fox in all other territories worldwide.

Edwards won the hearts of many sports fans by making a catastrophic showing at the 1988 Winter Olympics in Calgary.

Kingsman: The Secret Service star Egerton plays Eddie the Eagle and Hugh Jackman plays a ski jumping expert from Lake Placid who helps him train for the Olympics.

Lionsgate UK CEO Zygi Kamasa said: “When you combine Eddie The Eagle, Hugh Jackman, Taron Egerton, Matthew Vaughn and Dexter Fletcher making one of the biggest British movies for many years you’ve got something that’s unmissable.

“I’m the first one in line to pay to see that film and I don’t think there isn’t an adult in the UK who won’t want to join me. Charming, funny and emotional - audiences are going to love this.”

Matthew Vaughn added: “Eddie the Eagle is the feel good  inspirational movie the world needs now more than ever. The enthusiasm from Lionsgate, and in particular Zygi Kamasa, is so gratifying to everyone involved in the making of the film. We are delighted they are our partners.”