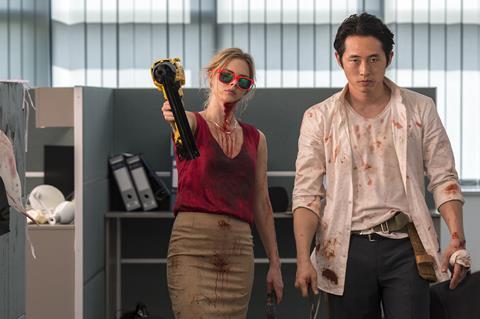 The story follows a couple in a strained marriage who become trapped in a Hitchcockian web of deceit when they are forced to cover up a crime on New Year’s Eve. Alex Esso, Perla Haney-Jardine and Ward Horton star. IFC Midnight distributes in the US.

Campbell said he had closed a raft of previously unannounced sales on Joe Lynch’s action-thriller Mayhem led by deals with the UK (AMC Networks’ Shudder) and Japan (New Select).

Steven Yeun from The Walking Dead stars alongside Samara Weaving from Ash vs Evil Dead in the story about a young attorney trapped inside a corporate tower where an airborne virus is spreading rage. Steven Brand and Dallas Roberts also star.

Noir-thriller A Crooked Somebody from director Trevor White stars Ed Harris, Clifton Collins Jr., Joanne Froggatt, Rich Sommer, and Amy Madigan. The story tells of an attention-seeking psychic who kidnapped and tries to use the situation to boost his popularity. Vertical Entertainment holds US rights.