Oscar nominations 2023: which UK and Irish films and talent made the cut? 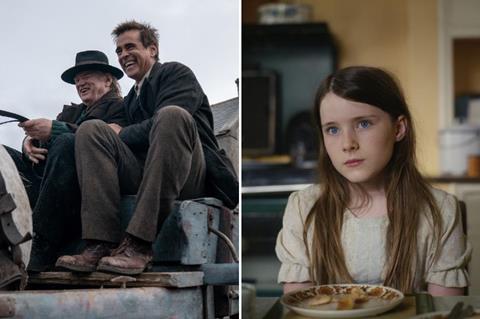 The Banshees Of Inisherin, The Quiet Girl

The UK and Ireland have certainly made their presence felt in the Oscars 2023 nominations list, with Ireland-UK-US title The Banshees Of Inisherin the joint-second most nominated titles with 11 nods, three UK-Ireland lead actor nominees, and an unexpected nod for the UK’s Andrea Riseborough for To Leslie in the lead actress category.

It should be noted that the best picture category and best director category did have a stronger UK presence in 2022 – The Power Of The Dog, an Australia–UK–Canada–New Zealand co-production, was nominated in both categories, as was Belfast, a UK production, from Northern Ireland-born director Kenneth Branagh.

This year, the UK is only represented by The Banshees Of Inisherin in both categories. The title is directed by UK-Ireland filmmaker Martin McDonagh, produced by McDonagh, Searchlight Pictures in the US and the UK’s Film4, with funding from US financier TSG Entertainment.

The UK presence is slightly bolstered by Swedish filmmaker Ruben Ostlund’s Triangle Of Sadness, also nominated in both the best picture and best director category. The Sweden-Germany-France-Denmark production also has a UK co-producer in the form of Good Chaos’ Mike Goodridge and backing from both BFI Film Fund and BBC Film. It is also shortlisted in the best original screenplay category.

In the performance categories, the UK and particularly Ireland’s talent really make themselves heard. Among the five lead actor nominations are Ireland’s Colin Farrell for The Banshees Of Inisherin, the UK’s Bill Nighy for Living and Ireland’s Paul Mescal for Aftersun (a 2020 Screen Star of Tomorrow).

Last year, the category saw no Irish nominations, and the UK represented by Benedict Cumberbatch for The Power Of The Dog and US-UK actor Andrew Garfield for Tick, Tick … Boom!.

In lead actress, UK star Andrea Riseborough – a 2006 Screen Star of Tomorrow – was something of a surprise for To Leslie, with the film not submitted for Bafta.

Actor in a supporting role sees two more Irish nominations – Brendan Gleeson and Barry Keoghan (a Screen Star of Tomorrow 2015), both for The Banshees Of Inisherin, while supporting actress is another clock for McDonagh’s film, with Kerry Condon nominated.

Colm Bairéad’s The Quiet Girl (An Cailín Ciúin) has made history as the first Irish-language title ever to get nominated in the best international feature film category. It is produced by Screen Star of Tomorrow 2022, Cleona Ní Chrualaoi. ”This is a truly historic and meaningful moment for Irish film, the Irish people and the Irish language,” said Bairéad and Ní Chrualaoi of their nomination. ”Never before has an Irish film been nominated in this category. Never before has Irish-language art been given such a platform. This film has been an extraordinary labour of love and it has been a joy to see audiences the world over take it into their hearts.”

Polish director Jerzy Skolimowski’s EO is also named in this section, which features the UK’s Jeremy Thomas of the Recorded Picture Company as an executive producer.

In the craft categories, the UK’s Empire Of Light has been nominated in the cinematography category; The Banshees of Inisherin for film editing; and UK-Hungary’s Mrs. Harris Goes To Paris for costume design; and UK cinematographer James Friend, who is nominated for his work on German Netflix feature All Quiet On The Western Front.

Further nominations include UK-India documentary All That Breathes in documentary; Living in adapted screenplay; UK’s The Boy, The Mole, The Fox And The Horse in animated short film; UK-Russian Haulout in documentary short; and Northern Ireland’s An Irish Goodbye in live action short.