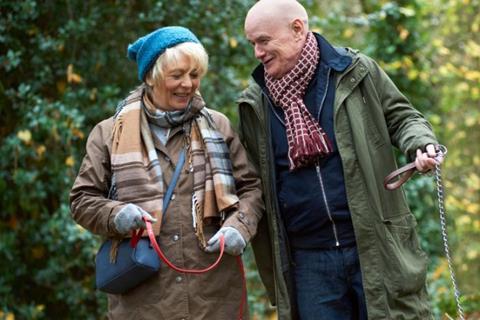 Distributor Parkland Entertainment will release the film in the UK and Ireland, while Parkland Pictures will look after the international sales for the rest of the world.

23 Walks is directed by Paul Morrison, Oscar-nominated for his debut feature Solomon & Gaenor, and whose other credits include Little Ashes and Wondrous Oblivion.

23 Walks is a comedy drama about finding love later in life. Dave and Fern, two older strangers, have both been bruised by events in their past. They meet walking their dogs in a North London park, and over the course of twenty-three walks together romance begins to blossom. But Dave and Fern haven’t been completely honest with one another and their future together may be threatened by the secrets they have withheld.

Steadman is an Olivier Award-winning actress whose credits include Life Is Sweet and Shirley Valentine, with television credits including Gavin & Stacey and Fat Friends. Dave Johns starred in Palme D’Or winner I, Daniel Blake, and has since featured in Fisherman’s Friends and The Keeper.

Parkland is starting sales on the film during the EFM. Also new on Parkland’s EFM sales slate is Ramazan Nanayev’s drama Roads To Olympia, which follows three aspiring athletes who fight homophobia in Russia, sexism in Saudi Arabia, and poverty in the favelas of Brazil on their way to the 2020 Olympic Games in Tokyo.