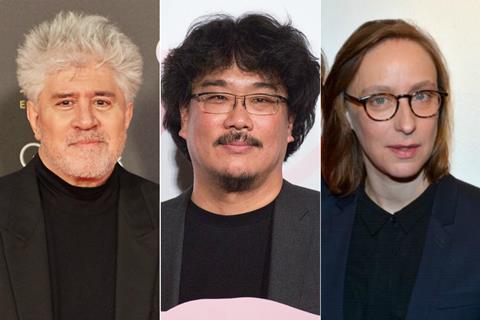 Five filmmakers expected to feature in the upcoming awards season have been lined up for Bafta’s 10th annual Screenwriters’ Lecture Series.

Writer-directors Pedro Almodóvar, Bong Joon Ho, Céline Sciamma, Noah Baumbach and Robert Eggers will deliver this year’s lectures, set to be held at the Curzon Mayfair and Curzon Soho in London from November 30 to December 12.

Spanish writer-director Almodóvar, whose Pain And Glory debuted in competition at Cannes in May, will launch the 10th series. The veteran filmmaker won the original screenplay Oscar in 2003 for Talk To Her.

French filmmaker Sciamma, whose Portrait Of A Lady On Fire won her the best screenplay award at this year’s Cannes, and US writer-director Baumbach, whose Marriage Story debuted in competition at Venice, will also share insight into screenwriting.

They will be followed by US filmmaker Eggers, whose second film The Lighthouse played in Directors’ Fortnight, and the series will close with South Korea’s Bong, whose latest feature Parasite won this year’s Palme d’Or at Cannes.

The events are open to the public and podcasts of all the lectures are set to be made available later in the year. Tickets are sold through Curzon.