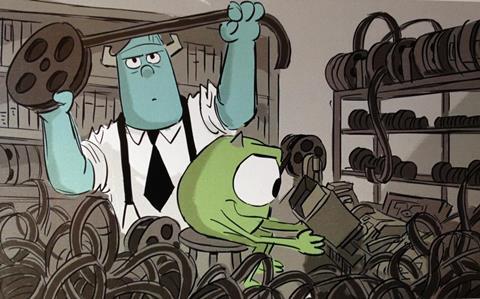 Loach put a call out through ScreenDaily last week to find a batch of film numbering tape, essential to help finish editing his next and possibly last narrative feature, Jimmy’s Hall.

The tape is needed to identify the sound and picture when cutting physical film stock and since Loach is likely the last feature director to have resisted the move to digital, supplies were due to run out at the end of this week.

After the story was published, Steve Bloom, an editor at Pixar in California jumped at the chance to help. Apparently, each editor at the animation studio, famous for films such as Toy Story, Finding Nemo and Up, has their favourite Loach film.

Not only did they send the studio’s entire stock of numbering tape – comprising 19 rolls of white tape and two rolls of yellow – but it arrived at the cutting room on Monday morning with a specially drawn picture of Monsters Inc. characters Mike and Sully surrounded by rolls of film in an editing room.

A total of nine Pixar editors signed the back of the picture with the message: “To Ken Loach and crew. Good luck from the editors at Pixar!”

Bloom was the editor on several Pixar shorts including Oscar-nominated Boundin’ and La Luna, and was second film editor on this summer’s sequel Monsters University.

Loach said: “We were delighted to know that Pixar is still in love with the same technology as us.  We hope to get to meet them along the way.  We’ve had a tinful of tape from a few other friends as well and we’re very grateful.”

A fine cut of the film is expected to be completed by the beginning of February.

Finlay is a film and TV editor with credits including DCI Banks, Without You and The No. 1 Ladies’ Detectives Agency.