The Riot Club no match for feelgood comedy drama on social networks in the UK. 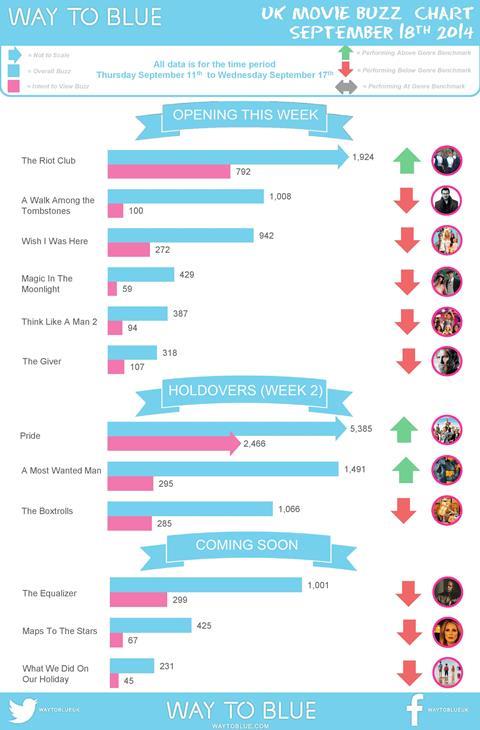 Matthew Warchus’s Pride has held the top slot of the social media buzz chart in the UK, according to Way to Blue.

The true story of gay activists who supported miners during the strike of 1984 generated more than 2,400 comments from Sept 4-10, with more than 45% of those expressing intent to view.

Lone Scherfig’s British elite drama The Riot Club, starring Max Irons and Sam Claflin, had to settle for second place with just over 1,900 comments, with a healthy 41% intending to covert comments into cinema tickets.

Also opening this weekend, A Walk Among The Tombstones, starring Liam Neeson, secured just over 1,000 comments but only 10% of those expressed intent to view.

It was topped by Anton Corbijn spy thriller A Most Wanted Man, featuring the last lead performance of the late Philip Seymour Hoffman, which drew nearly 1,500 comments; and animation The Boxtrolls, which snatched 1,066 comments.

Of the films coming soon, Denzel Washington’s next action drama The Equalizer topped the list with just over 1,000 comments - a third of which showed intent to view.