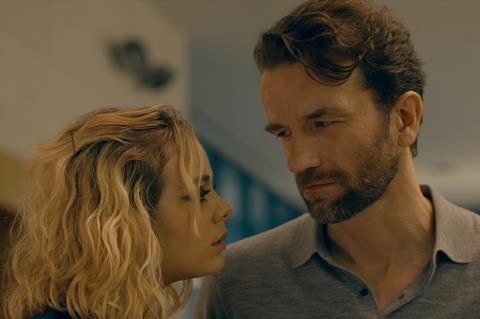 It has been snapped up for France (OCS), Germany (Koch Media), Poland (Best Film) and Taiwan (MultiVisionnaire Pictures).

The film is loosely adapted from Belgian writer Amélie Nothomb’s best-seller Cosmétique de l’Ennemi which was translated into 24 languages and which sold worldwide beyond 700.000 copies.

It revolves around a successful architect who is approached by an annoyingly chatty woman while waiting for a flight at an airport in Paris. His trip descends into a psychological nightmare as the innocent conversation slowly takes a more sinister turn.

The film has recently finished shooting in Catalonia and is now in post-production. Puslar Content is premiering a first promo at the EFM and has released a fresh image of stars Kot and Strates in the film [pictured].

It is a third feature for Maíllo after debut production Eva, which won a Spanish Goya for best new director, and 2016 crime drama Toro. It is produced by Spain’s Sabado Peliculas, France’s The Project Film Club and Germany’s Barry Films.