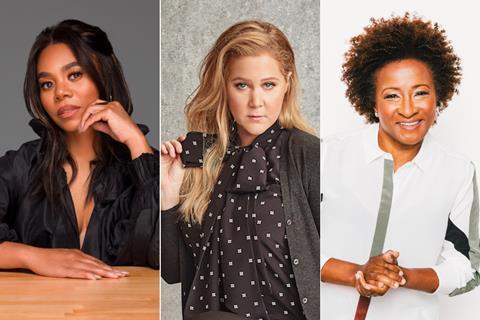 UPDATE, February 15 12.45 GMT: The Academy of Motion Picture Arts and Sciences has confirmed that US actresses Regina Hall, Amy Schumer and Wanda Sykes will host the 94th Oscars ceremony on Sunday, March 27.

“This year’s show is all about uniting movie lovers.  It’s apropos that we’ve lined up three of the most dynamic, hilarious women with very different comedic styles,” said show producer Will Packer. “I know the fun Regina, Amy and Wanda will be having will translate to our audience as well. Many surprises in store!  Expect the unexpected!”

“We want people to get ready to have a good time. It’s been a while,” said a statement from Hall, Schumer and Sykes.

Seeking to boost the Oscars’ mainstream appeal, the Academy has reportedly lined up Regina Hall, Amy Schumer and Wanda Skyes to co-host the March 27 awards ceremony and has separately teamed up with Twitter on a fan favourite vote.

The Oscars have been without a host since 2019 and the Academy previously said a host would return under the auspices of 94th Academy Awards producer Will Packer. The Academy had not returned calls at time of writing to confirm the development.

The Twitter partnership is official and will see users of the social platform vote on their favourite film of 2021 using the hashtag #OscarsFanFavorite. Users can vote up to 20 times a day from today (14) through March 3 and the winner will be announced during the awards show.

The vote will not constitute a new Oscar category but will present an opportunity to champion a film that may not have made it on to the 10-strong best picture list. In the run-up to the Oscar nominations there were reports that Sony’s box office titan Spider-Man: No Way Home might become a best picture contender. It did not make the cut – although it is in the running for best visual effects – however it may get recognition through the Twitter partnership.

The initiative is the latest bid by the Academy for pop culture relevance after the body scrapped plans for a most popular film category several years ago after a backlash from members and critics.

Three Twitter users who take part in the #OscarsFanFavorite vote will be invited to bring a guest and present an Academy Award at the 95th ceremony in 2023. In addition, Twitter users have been invited to post about their favourite scene from a 2021 release through the #OscarsCheerMoment initiative. The Academy will show winning scenes during the March 27 telecast and five users will receive prizes including one year of free cinema-going at the venue of their choice.

The Oscars telecast is regarded as out of touch with mainstream audiences that may not have seen, or care about, arthouse feature contenders or even broader films that either belong to streaming platforms or, due to the pandemic, have not benefited from the visibility that comes with a wide theatrical release and marketing campaign.

Meryl Johnson, the Academy’s vice-president of digital marketing, said the partnership would give Twitter users ”more opportunities to engage with the show in real-time, find a community and be a part of the experience in ways they’ve never been able to before”. Sarah Rosen, head of US entertainment & news partnerships at Twitter, added that the Oscars are ”one of the biggest conversation drivers every year”.