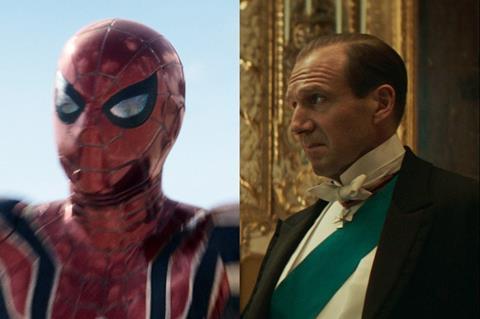 Spider-Man: No Way Home has continued its reign at the top of the UK-Ireland box office chart across the New Year’s Day weekend (December 31-January 2), with £6m in its third session.

That is an increase of 31% from the Tom Holland-led film’s second session, which took £4.6m across the Christmas weekend. The Sony feature has now grossed a total of £69.8m at the UK-Ireland box office.

Disney’s Kingsman prequel The King’s Man has done the best out of this week’s new releases, ahead of Titane and The Electrical Life Of Louis Wain. The King’s Man is directed by Matthew Vaughn and stars Ralph Fiennes, Rhys Ifans, Harris Dickinson, Gemma Arterton and Tom Hollander, and took £1.1m from 628 locations, with a location average of £1,751. This doesn’t match up to Kingsman: The Golden Circle, which took £8.5m in its opening weekend in 2017. However, The King’s Man has also received a further £2.4m from previews, boosting its total up to £3.5m.

The rest of the top five has been dominated by holdovers, with eOne’s Clifford: The Big Red Dog taking £778,802 in its fourth session, up 122% from its previous week, bringing it up to £6m.

The Matrix: Resurrections, released by Warner Bros, took £760,427 in its second session, down 72% on its first weekend including previews, and 16% excluding previews. The total is £5.3m.

Cannes Palme d’Or winner Titane, Julia Ducournau’s second feature, released by Altitude, took £28,803 across the weekend at 81 locations, giving a location average of £356. This figure is plumped up to £121,920 when including previews from its December 26 release.

Studiocanal’s biographical drama The Electrical Life Of Louis Wain, starring Benedict Cumberbatch as British artist and cat enthusiast Louis Wain alongside Claire Foy and Andrea Riseborough, has been released in 232 locations taking £67,130, with a location average of £290. Including previews, the total stands at £85,763.

Animated Disney adventure Encanto took £241,873 in its sixth session, bringing it to £6.1m.

Universal’s House Of Gucci brought in £139,718 in its sixth weekend, up an impressive 191% on its previous session and bringing its total to £8.8m, while Sony’s Ghostbusters: Afterlife also saw a strong increase, taking £127,872 in its seventh session, up 118% on the previous weekend, to a total of £11m.