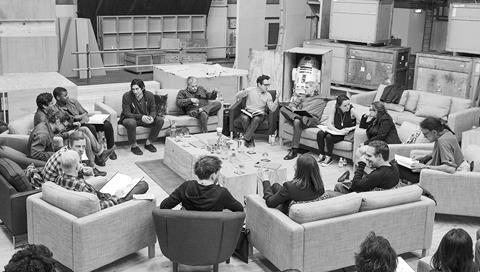 Harrison Ford, Carrie Fisher and Mark Hamill are to reprise their roles as Han Solo, Princess Leia and Luke Skywalker for the latest film in the franchise, Star Wars: Episode VII.

Their long-rumoured involvement was confirmed through an announcement on StarWars.com.

Today marked the first readthrough of the closely guarded script and was accompanied by a picture of the assembled cast, all of which were also revealed for the first time.

They included British actor John Boyega, who made his feature debut in 2011’s urban alien invasion thriller Attack the Block and will next be seen in the new series of 24, which shifts the action to London. He was also named a Screen International Star of Tomorrow in 2011.

He will be joined by another Brit, actress Daisy Ridley, who has only had a handful of small roles in UK TV series such as Casualty, Silent Witness and Mr Selfridge.

The newly announced cast is rounded out by veteran Max von Sydow and Andy Serkis, best known for his motion capture work as Gollum in the Lord of the Rings trilogy as well as the recent Planet of the Apes movies.

Open auditions for two roles in the new films were held in the UK and Ireland last November, calling for a “street smart and strong” orphaned girl in her late teens and a “smart capable” man in his late teens or early 20s.

Star Wars: Episode VII is being directed by J.J. Abrams from a screenplay by Lawrence Kasdan and Abrams. Kathleen Kennedy, Abrams, and Bryan Burk are producing, and John Williams returns as the composer.

Abrams said: “We are so excited to finally share the cast of Star Wars: Episode VII. It is both thrilling and surreal to watch the beloved original cast and these brilliant new performers come together to bring this world to life, once again.

“We start shooting in a couple of weeks, and everyone is doing their best to make the fans proud.”