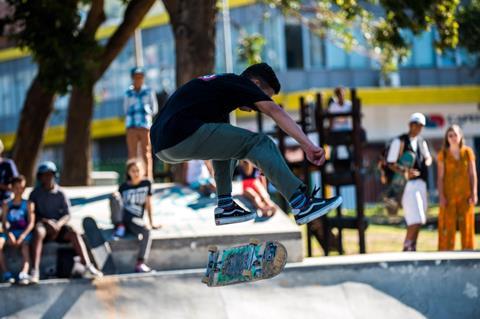 SXSW will showcase on Oculus TV later this month seven 360 virtual reality projects that had been selected to play at the cancelled festival.

SXSW 2020 Virtual Cinema on Oculus TV will run from May 22-31 and includes work from Keya, Taiwan, France, Switzerland, and the US. The titles appear below. All synopses provided by SXSW.

After The Fallout (Switzerland/US)
Dirs: Sam Wolson, Dominic Nahr
This unforgettable 360-degree experience pushes past traditional documentary tropes to evoke the reality and emotional gravity of life in Fukushima, ten years after the 2011 nuclear disaster. After the Fallout is an immersive mosaic that takes us through surreal environments in the exclusion zone, and explores the lives of families as they navigate a new world which they have had to adapt to.

The Curious Life Of Bill Mont
Dirs: Andrea Patiño Contreras, Katrina Sorrentino
While preparing for a winter formal at Northwood, a senior living center in Halifax, Nova Scotia, Bill Mont, an 89-year-old self-made entrepreneur, reminisces about his life, including his most recent venture – sending people’s ashes to the moon. As he ruminates on love and loss, as well as his entrepreneurial projects and acquisitions, in a 9 minute 360 virtual cinema film, we experience what it’s like to have fun while aging.
World premiere

Ferenj: A Graphic Memoir In VR
Dir: Ainslee Alem Robson
How is identity conceived? What does it mean for your home to be constructed immaterially via fragments of culture and oral history distorted by the filter of time and migration? This afrosurreal portrait of home traverses crosswalks, continents and consciousness, moments of cultural alienation, and the director’s childhood memories from Empress Taytu Ethiopian Restaurant in Cleveland, Ohio to the streets of Addis Ababa, Ethiopia — her mother’s home country. Ferenj reclaims Ethiopian-American mixed-race identity, redefines boundaries between memory and digital imaginary, and challenges reductive narratives of Africa.

Gr8ness (Kenya, pictured)
Dirs: Michael Ilako, Isa Paul Mohamed
70% of 20 million youth in South Africa have been victims or perpetrators of crime. Of every 100,000 youth, 37% have dropped out of school before matriculation. The documentary explores how these statistics can be changed by exposing youth to the opportunities of creative industries, which are sadly not known by most at-risk youth of South Africa. Ethan grew up in Muizenberg with his parents and siblings, due to tough economic times Ethan had to move to Grassy Park and live with his grandmother. Through Ethan’s lens, we want to take the user on a journey to experience the growth of the relationship between the child and mentor as they explore art and creativity together in Cape Town.
World premiere

Look At Me (Taiwan)
Dir: He Wei-Ting
Zhang, like everyone in the near future, is addicted to the virtual world. A failed rendezvous with his girlfriend makes Zhang wander the city at night, where he discovers a club where everyone gives up the virtual world for physical fighting, to engage in “real interactions”, and where everyone actually looks at each other during conversation.
North American premiere

Notre-Dame De Paris: A Unique Journey Back In Time (France)
Dir: Mélanie de Riberolles
On April 15, 2019, the world witnessed as Notre-Dame Cathedral was nearly destroyed in a devastating fire. As the tragedy unfolded, people began sharing memories of the cathedral with photos and videos reliving those moments. Others were able to relive their memories virtually through Assassin’s Creed Unity, the video game. Ubisoft has been collaborating with historians for years, meticulously collecting data and testimonials to build Notre-Dame in-game. Based on this 3D model, Ubisoft created a VR tour of Notre-Dame so people can get back to the cathedral and discover point-of-views that were inaccessible to the public, or elements of architecture that were destroyed by the fire, including the famous spire.
North American premiere

A Song Within Us (Taiwan/France)
Dir: Fangas Nayaw
A Song Within Us is a sound-interactive experience, with Ambisonic audio. During the experience, audience members will mimic the tribal leader, who will teach them to sing together. Viewers can receive visual feedback for the efforts. There are two versions of the project, both with spatial audio. One version is an individual, immersive sound experience, but we also designed an ambisonic dome for a physical installation. In the ambisonic dome, viewers will experience the project without wearing earphones and five audience members can discover the piece together.
North American premiere

“We are so excited to offer global audiences an opportunity to experience these phenomenal 360 projects on Oculus TV,” SXSW virtual cinema programmer Blake Kammerdeiner said. “This sampling of what would have been a robust XR program is sure to delight audiences, and we are thankful to OculusTV for helping us showcase these artists and projects.”