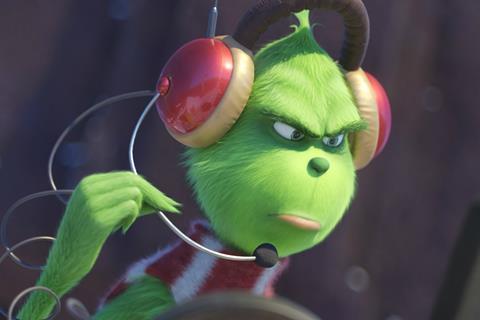 3D family animation The Grinch has dislodged Bohemian Rhapsody from the number one slot at the top of the UK box office, taking £5m from its first three days.

Playing in 561 sites, the film scored a decent average of £8,956. It achieved Universal’s best opening in the UK since Mamma Mia! Here We Go Again started with a £9.7m three-day weekend in July this year.

It also surpasses the £3m opening for Ron Howard’s live-action The Grinch starring Jim Carrey (called How The Grinch Stole Christmas in the US) in 2000, although the two figures are almost identical when taking into account inflation.

This puts it slightly behind McQueen’s 2014 Oscar-winner 12 Years A Slave, which opened with £2.5m from 207 sites in January of that year including £41,000 of previews. Fox will be hoping Widows can achieve a similarly lengthy tale, with 12 Years going on to take £20m in the UK.

Queen rock biopic Bohemian Rhapsody drops to second spot in the chart in its third week, taking £4.5m across the weekend for a soft 21% drop and £29m cume.

Compared to Mamma Mia! Here We Go Again, another 2018 music success story, it is below the £39.3m total of that film after three weeks, but has again dropped less across the same time period, and its £4.5m is more than the £4.1m the ABBA film took on its third weekend.

Rhapsody also increased its number of locations to 690, a high across its run.

Peter Jackson’s WWI documentary They Shall Not Grow Old, featuring restored footage of soldiers in the trenches, opened to £263,000. The film also played on BBC Two on Sunday evening at 9.30pm, as part of the commemoration of 100 years since the end of the war.

A Star Is Born sang its way to £1.2m across the weekend. A 32% drop is its biggest so far, but after six weeks a £25.4m cume is very healthy, and Warner Bros will look for it to hit £30m and beyond in coming weeks. It has now broken into the top 10 highest-grossing titles in the UK in 2018.

The Nutcracker And The Four Realms dropped 36% on its second weekend for £1.1m. It has grossed £3.4m after 10 days and will look for a boost in the run up to the Christmas period.