TIFF panel explores how to address imbalance and toxic behaviour 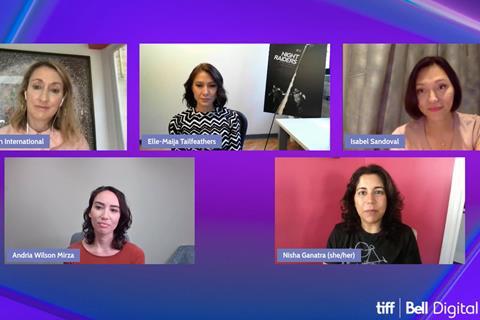 TIFF panel ‘Reset: Dismantling Toxic Behaviours On Set and In the Industry’

Filmmakers discussed their ongoing efforts to shift the culture of Hollywood away from the traditional white, male-oriented perspective and grow opportunities for women and people of colour in a TIFF Perspectives Industry panel over the weekend.

Hosted by Screen’s deputy editor Louise Tutt four speakers addressed the issue in the hour-long session ’Reset: Dismantling Toxic Behaviours On Set And In The Industry’.

“Pay a lot of attention to your DP and their philosophy,” said Late Night and Chutney Popcorn director Nisha Ganatra. “You’re focused on the actors and performances and [you] kind of run the set but the DP runs the crew and they’re in charge of hiring a lot of departments that you’re interacting with all day.

“It doesn’t have to be a woman or person of colour, but if it is a guy make sure they are inclusive because no matter what example you’re leading as a director that person is equally leading by example to a lot of the crew.”

The filmmaker also spoke about her company Ladies’ Car Production housed at ABC Studios. “It feels like I can be in a position to hold the door open for other women of colour and other minorities from other under-represented groups and shove everybody through as fast as I can.

“It’s part of my not-so-hidden agenda at Disney and I told them as much and luckily we have a few projects in development on different storytellers on shows we’ve not seen before… I am part of the wave of people who see there was never a zero-sum equation – that was a lie, there never was. There was room at the table for all of us and if there’s not we’re going to get a bigger table.”

Elle-Maija Tailfeathers of the Kainai First Nation (Blackfoot Confederacy) stars in in TIFF selection Night Raiders and directed Kimmapiiyipitssini: The Meaning Of Empathy and The Body Remembers When The World Broke Open.

In Kimmapiiyipitssini she address the topic of the opioid crisis in North America and its impact of indigenous people and wanted to change the perspective away from “the news media portraying us through this trauma”. She said, “My initial goal was to showcase all of that hard work and counter those misrepresentations with representations of strength and heard work in my community.”

Tailfeathers has also introduced cultural competency training on her sets and in the case of The Body Remembers When The World Broke Open knew she would have a large non-indigenous crew. “We had a full day of mandatory cultural competency training. We had an indigenous lawyer who came in and worked with the crew and talked about Canada’s history. Initially the crew was unhappy about it because it was taking away time for prep but it’s so important and we recognised it should be time of the prep process.”

Deviating from the male gaze

Trans filmmaker and actor Isabel Sandoval described how she used her role as not only lead actor but director on the 2019 drama Lingua Franca to assume the reins when depicting a sex scene involving her character, an undocumented Filipina transwoman who falls in love in Brooklyn.

“I wanted to subvert and deviate from the predominant cinematic gaze we tend to see in sex scenes and that gaze tends to be male cisgender,” said Sandoval, who shot her sex scene on the first day “to get it out of the way”. She said, “A lot of sex scenes tend to be short, brief shots of naked body parts gyrating against each other. There’s an unusual and unhealthy fixation with trans bodies, particularly trans women. When we shot it it was a closed set – it was me, Eamon [Faren, co-star], my director of cinematography who I trust very much, the assistant director and production sound person.”

She had the camera focus on her face for much of the shot to “have that scene ultimately not just about the sex but a true and genuine character moment for the character Olivia. It was three takes: the master shot, and the last two were mostly on my face registering and acting out the gamut of emotions”.

It was her first film after her transition and although she had acted in her own films before she had not done any sex scenes. “I was very conscious how a sensual scene featuring a trans woman directed by a trans woman of colour was going to be rare if not one of a kind in America… What ultimately registers is not shots of random body parts but how layered and complex fleshed out this woman becomes in a scene that is purportedly a sex scene.”

ReFrame director Andria Wilson Mirza talked about the ReFrame stamp that holds to account efforts within the industry to shift the culture and increase the number of women of all backgrounds working in the screen industries.

Mirza reported how the climate is changing slowly but surely. “It’s a fascinating moment to be doing this. When the Stamp was first rolled out there was a lot more resistance and that comes from folks looking at their own slate and thinking they wouldn’t measure up. Now the studios have been making more investment on their own internal equity and inclusion programmes they’re also looking for steps to accountability. They’re open to opportunity. They’re open to a public conversation and more transparency from these processes and that is going to help us to move forward. But we still have to push – that’s the work. We’re in advocacy… we have to come up with new ways to measure because if we’re not measuring we can’t fix it.”