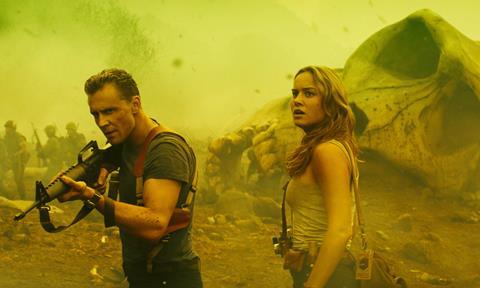 Kong: Skull Island brought a swift end to Logan’s UK reign as it debuted top of the box office.

The opening compares favourably to Legendary’s Godzilla reboot, the first instalment of their MonsterVerse, which opened with $7.8m (£6.39m) from 550 sites and bigger previews of $1.45m (£1.19m).

That film went on to take $21m (£17.2m) in the UK which seems like a sturdy target for Kong: Skull Island, although it will have to compete with the arrival of Disney’s likely huge Beauty And The Beast remake this Friday (March 17).

Fox’s latest X-Men offering is now up to a promising $20.6m (£16.86m) after 12 days in play, already making it the biggest solo Wolverine outing in the UK and the fifth-biggest Fox Marvel outing, including Deadpool.

Logan should hit £20m by the end of this coming weekend at the very latest, which would make it only the third X-Men film (excluding Deadpool) to cross the £20m mark.

Altitude’s Best Picture winner is now up to an excellent $4.1m (£3.35m) in the UK and will be playing in 431 sites overall this week, but not all sites will be playing for the full week.

Sing fell out of the UK’s top five for the first time in its seventh week of release.

Also for Universal, Fifty Shades Darker is now the second biggest 18-rated film of all time at the UK box office.

The result means that the award-winning musical is the distributor’s third biggest release of all time at the UK box office, behind Hunger Games outings Catching Fire ($41.8m/£34.2m) and Mockingjay - Part 1 ($38m/£31.1m).

Also for Lionsgate, Patriots Day stands at $2.1m (£1.72m) and ranks as one of director Peter Berg’s lowest-grossing films in the UK.

As part of Picturehouse’s Discover Tuesdays, the film will play in 31 sites tomorrow (March 14).

This week sees saturation releases for Disney’s Beauty And The Beast and Universal’s US box office smash Get Out.

Icon Film Distribution’s Personal Shopper receives a wide release, while Curzon Artificial Eye’s The Salesman, Warner Bros’ Wolves At The Door and Studiocanal’s Seoul Station are among the films receiving a limited release.