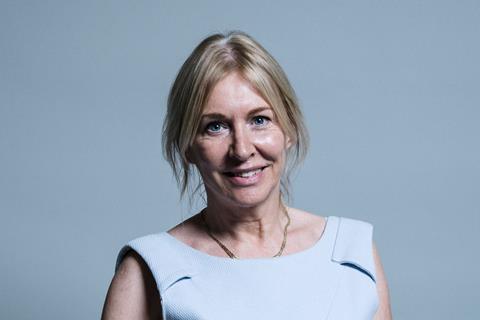 The UK culture department, headed by culture secretary Nadine Dorries, is embarking upon a wide-ranging review into the UK creative industries, and has issued a call for contributions from creative businesses, including the film and TV sectors.

Speaking at the Creative Coalition Festival this morning (February 1), Dorries said that the report is to be titled Sector Vision, and will consist of four objectives: “To ensure the creative sector is globally competitive, inclusive, environmentally-stable and embedded in communities up and down the country.”

The report will be published this summer.

Dorries added she would also bring her “personal priorities” to the project, including improving accessibility for those from deprived backgrounds, and boosting the government’s wider ambition to ‘level up’ towns and communities across the UK.

“Levelling up is not just about transport links and infrastructure – it is about giving people chance to live rich fulfilling lives wherever they are in the UK,” she said.

Dorries invited creatives to send in their feedback via Creative UK, which is working closely with the Department for Culture, Media and Sport (DCMS). Creatives wishing to contribute have been invited to join a Creative Coalition Festival session (Thursday 3 February, 4pm), with minister for media, data, and digital infrastructure, Julia Lopez, to discuss their priorities.