US outfit Fun Academy to move into UK distribution with 'Sgt Stubby: An Unlikely Hero' 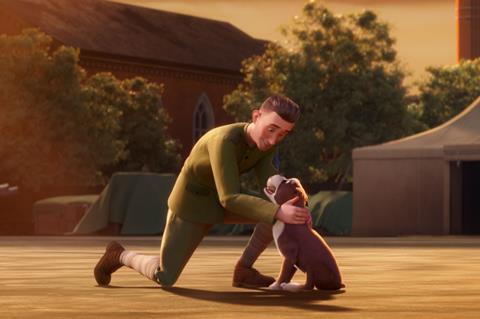 The prodution and distribution outfit  is partnering with Jade Films, the company owned and founded by Dave Woodward, also the head of theatrical sales at UK disributor Thunderbird Releasing, to physically release the film on over 100 screens in the UK and Ireland.

Directed by France-based UK filmmaker Richard Lanni and with an English-language voice cast of Helena Bonham Carter, Gerard Depardieu, and Logan Lerman, the film is based on the true story of America’s most decorated dog – a stray with a stubby tail rescued from the streets of New Haven, Connecticut, by a young “doughboy” on the eve of the US’s entry into the First World War. The dog and his rescuer Robert Conroy end up in the trenches together. Heroic mutt Stubby is eventually promoted to the rank of sergeant in the US Army.

Sgt Stubby: An Unlikely Hero was made in partnership with Technicolor-owned animation and visual effects company Mikros Image Animation, which has been involved in further recent animated projects such as Sherlock Gnomes and Captain Underpants.

Georgia-based Fun Academy Motion Pictures was founded in to 2016 to make educational content to be released commercially. It is a wholly-owned subsidiary of Fun Academy Media Group, formerly Labyrinth Media & Publishing. which is headquartered in in Ireland and is collectively owned by a group of Irish tech entrepreneurs.

The film was financed by private equity and debt finance and accessed Canadian and French tax credits.

Fun Academy released Sgt Stubby heatrically itself in the US earlier this year where it has grossed a reported $5.1m to date. “It was a case of being creative and building relationships with exhibitors,”  said Emily Cantrill, producer and head of creative at Fun Academy. “We had a very small p&a budget but what we did in America and what we also are trying to replicate [in the UK] is that we had a non-profit organisation, a dog’s group, adoption centres, military groups and veterans’ groups that we partnered with. We had over 100 in the end. They were given a percentage of box office.”

Exhibitors that screened the film in the US included AMC and Cinemark.

Two Stubby sequels are now in the works, following the heroic dog in this post-war life.  “When Stubby came home from France, his story continued,”  explained Cantrill, ”He went on tour with Robert Conroy; he met US presidents and he toured in vaudeville with the likes of Harry Houdini. We’re going to do a story on that part of his life.”

The third film, meanwhile, will cover the period when Conroy studied law at Georgetown University with the faithful Stubby by his side. The dog died in 1926. His remains are preserved in the Smithsonian Museum.