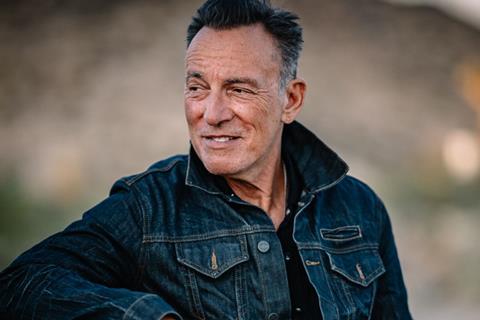 Warner Bros is staying in the Bruce Springsteen business and has picked up worldwide rights to Toronto-bound Western Stars as the studio prepares to launch Gurinder Chadha’s Springsteen-themed Blinded By The Light on Friday (16).

Western Stars receives its world premiere in Toronto’s Gala section next month and finds The Boss in “intimate and personal” mood as he performs his latest album of the same name with a band and full orchestra under the cathedral-like interior of his barn.

The documentary comes in at a tight 83 minutes and includes Springsteen’s reflections on his music, life, and the American Dream. The entertainer co-directed with Thom Zimny, and Warner Bros will release in autumn, with an awards play a distinct possibility.

Springsteen and Zimny collaborated on documentary The Promise: The Making Of Darkness On The Edge Of Town, and the filmed version of the Tony Award-winning Springsteen On Broadway for Netflix, which Zimny directed.

Western Stars is written and performed by Springsteen, with special guest Patti Scialfa. Zimny, Jon Landau, Barbara Carr and George Travis produced the film, with Springsteen serving as executive producer and composer of the original score.

The acquisition positions Western Stars as a companion piece of sorts to New Line’s Blinded By The Light. Warner Bros will offer a first look before screenings of Chadha’s film in the US, starting on Friday (16).

Viveik Kalra stars in the latter film as a young man growing up in Thatcher era Britain in the 1980s who finds inspiration in Springsteen’s music. Warner Bros / New Line paid $15m for most of the world in Park City following the world premiere. Nell Williams, Aaron Phagura, and Hayley Atwell also star.