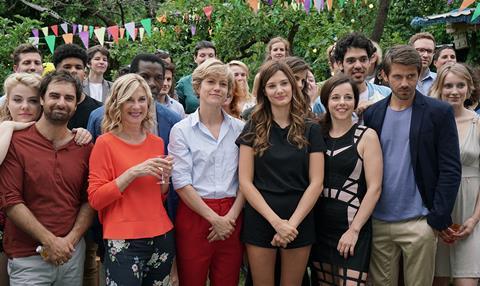 Paris-based genre specialist WTFilms has taken on international sales of mainstream, same-sex romantic comedy Kiss Me! (Embrasse Moi!) in which the protagonist falls for a woman with 76 ex-girlfriends and a crazy family.

The company will kick-off sales on the title, which is in post-production, at the Unifrance Rendez-vous with French Cinema this week.

She plays a happy-go-lucky osteopath who falls for the beautiful Cécile, an artist who has taken a personal vow of celibacy after a series of failed relationships.

Alice Pol plays Cécile. The actress’s other recent credits include Dany Boon’s latest comedy Raid Special Unit (Raid Dingue) in which she co-stars as a hopeless special police force recruit. That film is screening at the Rendez-vous.

Océanerosemarie co-wrote and directed Kiss Me! – which shot in Paris over the summer — with Cyprien Vial, whose solo credits include the cross-culture drama Young Tiger (Bébé Tigre).

It is produced by Nolita Cinema and will be distributed in France by Haut et Court.

“Océanerosemarie is a rising star of the stand-up scene who we think belongs to that generation that can reinvigorate French romantic comedy, especially through a same-sex romance angle,” commented WTFilms co-chief Grégory Chambet.

The involvement of Vial, Pol, Nolita and Haut et Court had also drawn WTFilms to the project, he said.

In other WTFilms news, Chambet also unveiled a handful of first deals on Jean-Claude Brisseau’s 3D tale of “love and transgression” Tempting Devils (Que Le Diable Nous Emporte) on the back of first footage shown at the AFM last year.

It has sold to Japan (At Entertainment), Germany (Alamode Film), Taiwan (Moviecloud) and Scandinavia (Njuta Films)

Chambet says the work marks “a new chapter in Brisseau’s filmography” which includes titles such as Locarno Golden Leopard winning The Girl From Nowhere, Secret Things and Exterminating Angels.