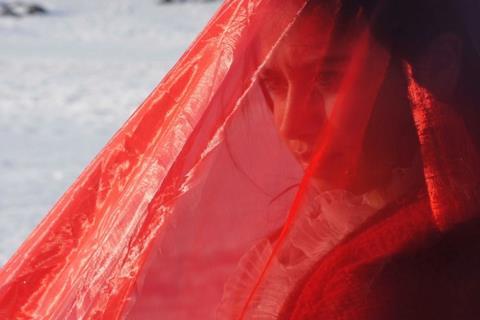 The minimalist spirit of Nuri Bilge Ceylan is hovering over the proceedings in Night Of Silence (Lal Gece) and indeed, he gets an appropriate mention in the final credits. With the exception of a 15 minutes introduction, the entire picture takes place in one single room and relies on two remarkably subtle and understated performances by a man in his sixties and a young girl who couldn’t be more than 14.

Celik’s direction pinpoints a way of life and a certain type of ceremonies that add their own dimension to the metaphor.

Deliberately very slow, often poetical but certainly nothing like any wedding night movie one would imagine, it’s inclusion in Berlinale’s Generation section might be misleading, for Reis Celik, better known as a documentary filmmaker, offers the kind of fiction to be savoured only by patiently mature art house audiences.

Having spent most of his life behind bars for killing, first his mother and then another man, to safeguard the honour of the family, Damat (Ilyas Salman) is finally back in his mountain village and the family has arranged for him to marry a girl he has never seen, Gelin (Dilan Aksut).

The marriage isn’t just the prize he gets for respecting tradition at a high cost, but also the final act that will put an end to an ancient blood feud between two families. Though it opens with the customary colourful local scenes of a traditional Turkish country wedding, the mood changes once Celik leads his two main protagonists into the bridal room, where the act of marriage is to be consumed and proof of the husband’s virility - as well as of his wife’s virginity - is to be produced when the sun comes up.

From this point on the film unfolds in an unexpected direction. For the two persons left alone in this room are both terrified, each in his own way and both for their own very good reasons. They both realize they have to play their parts as husband and wife just as conventions expect them, but neither one nor the other knows exactly how to do it.

The girl, a pretty image of early adolescence, is fearful and surly, hesitating and trying any subterfuge she can think of to delay the critical moment. The man, squat, stocky, with a weather-beaten face and an awe-inspiring moustache, is surprisingly gentle and understanding in his own gruff way, attempts to melt down her resistance and refrains from ever using his authority or force, to get his way. As the sparing match between the two of them reaches its final stages, the girl seems to cope with her anguish better than the man, whose past keeps creeping up to the surface to crush him down.

With its opening sequence taking place in a cemetery and the final one overlooking the spectacular snow-covered landscape of a silent village, the morning after, this isn’t a very happy picture. Its intimate, sensitive and well-shot portrait of a tragic situation foretold, could be easily construed as a veiled allegory of a society keeling under the weight of patriarchal customs and never daring to say a word against it.

Unobtrusively, Celik’s direction pinpoints a way of life and a certain type of ceremonies that add their own dimension to the metaphor. The restraint of both Ilyas Salman and Dilan Aksut plays in their favour, both of them simple, humane and touching characters, their reactions to each other natural and devoid of all mannerisms. There is no musical score to underline the plot, the spare nature of the entire project is eloquent enough on its own terms.