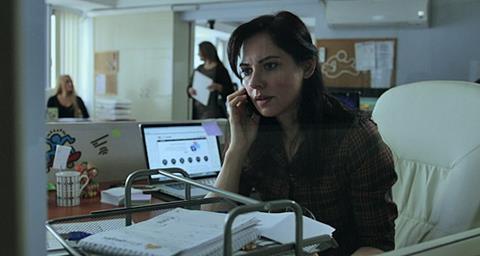 This bleak, downbeat, drama marks the debut of writer Deniz Katiksiz, and on paper should scare audiences away with its grim, unforgiving portrait of family life. Instead, it won the First Feature Award - and perhaps even more significantly the Audience Award - at the Istanbul Film Festival, suggesting the author’s impassionate approach, most probably due to her personal relationship to the story, has managed to break down any resistance the viewers might have.

Nicely shot and economically cut at 81 minutes, the script, though evidently siding with the two daughters and displaying a growing distaste for the mother’s panic-stricken tactics and the son’s shenanigans, manages to embrace them all by the end of the film with a degree a grace.

And though Nobody’s Home (Koksuz) is very distinctly about a Turkish family and such typical themes as male chauvinism and outdated traditions play an important part in the events, the desolate process that ultimately tears this particular family apart could resonate with any audience, regardless of its national identity.

As the film starts, Nurcan (Lale Basar) has lost her husband and is gradually losing her hold on herself and her children. Wallowing in self-pity, capitulating before the slightest crisis (a leaking pipe under the kitchen sink is a major disaster) alternately sniveling and moaning, complaining and bitching, she is kept afloat by the persistent support of her 32 year-old daughter Feride (Ahu Turkpence), who works in an office by day and assumes responsibility for the entire household most of the time.

This doesn’t leave her much time for Feride herself. Her younger brother Ilker (Savas Alp Basar) is 17, a typically angry, rebellious, often nasty piece of work; a young male who expects to be in charge of the family but will do absolutely nothing for it, except smoking pot, skipping school and having occasional sex with the mother of one of his colleagues, whom he first tries to rape before he realises that all he has to do is ask.

Finally, there is the youngest daughter, meek and gentle Ozge (Melis Ebeler), desperately in need of some affection and understanding and taking the brunt of her mother’s hysterical fits without a single shoulder in sight to cry or lean on.

Essentially each one of these characters is a victim and none of them seem capable of controlling his or her own life. It is certainly true of Nurcan, a still handsome woman who, having lost the man in her life, declares herself officially defeated, her manic-depressive insecurities driving Ilker away from home and Ozge into silent despair, while Feride, the only one adult enough to function normally, is finally crushed by the demands made on her and accepts a marriage proposal that is not certain to make her any happier.

Her breaking down in front of her mirror as she brushes her teeth after her fiancé’s attempt to kiss her is one of the film’s most painful moments. So are Ozge’s expression, as she leaves school after her mother had failed her once again; Ilker’s despondence as he rushes after a passing car, thinking his late, badly missed father was sitting in it, or Nurcan’s frozen face, a mask of fear, frustration, anger and even spite, watching her daughter being married and abandoning her.

Moments like these, and the remarkable identification of the four leading actors to their parts lift this material way above the soap opera level it would have been very tempting to sink to. Nicely shot and economically cut at 81 minutes, the script, though evidently siding with the two daughters and displaying a growing distaste for the mother’s panic-stricken tactics and the son’s shenanigans, manages to embrace them all by the end of the film with a degree a grace, even though it doesn’t hold, however, much promise for the future.