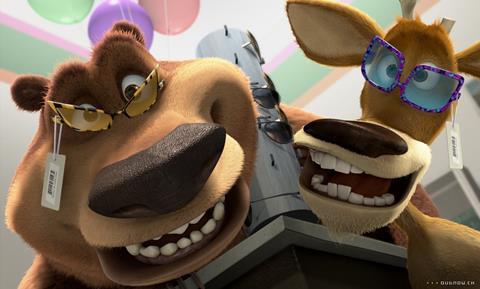 Eighteen months ago, Open Season might have seemed like a perfectly respectable computer-animated adventure comedy for the reliable family audience. But coming as it does after the herd of computer-animated creature movies that has recently passed through cinemas, this first feature from Sony Pictures Animation feels disappointingly formulaic and, though impressive technically, lacklustre in other key departments. The new Sony division will need to findsome stronger material than this if it wants to become a major player in the increasingly crowded computer animation field.

The main characters have a likeable but fairly bland appearance

The division’s sister distributor Columbia Pictures opens the PG-rated film this weekend in NorthAmerica, with only Fox’s recent Everyone’s Hero as direct animated competition. Sony’s extensive marketing effort should ensure a big first weekend, but Open Season probably won’t have the staying power necessary to earn the kind of domestic grosses achieved this summer by computer-animated creature features Ice Age: The Meltdown($195.3m) and Over The Hedge($155m).

Sony Pictures Releasing International (SPRI) will open the film in other territories through October, November and December and should, given the international market’s appetite for animated animal movies, be able to produce some strong returns. A really big international take seems unlikely, though, unless SPRI can avoid competition and monopolise the children’s audience during local school holidays.

Written by the Chicken Little team of Steve Bencich and Ron J Friedman and comedy scribe Nat Mauldin,the film tells the story of Boog (voiced by a barelyrecognizable Martin Lawrence), a genial grizzly bear who lives in the mountaintown of Timberline with kindhearted forest rangerBeth (Messing). After wrecking a convenience store during a late night eatingbinge, Boog is returned to the wild, where his onlyacquaintance is Elliot (enjoyably voiced by Ashton Kutcher),a fast-talking but hapless mule deer.

With its grumpy hero andzany foil, its contrast between the human and animal worlds, and its comicalhuman villain - a redneck hunter (voiced by Sinise)out for Elliot’s head - the story often seems like a mix of elements from Madagascar, Ice Age, Over the Hedgeand other recent animated animal offerings.

The film - on which Lion King co-director Roger Allers, Pixar animator Jill Culton and Antz story artist Anthony Stacchishared directing duties - meanders pleasantly though rather aimlessly throughits first hour, as the clingy Elliot tries to befriend Boogand then guide him back to his familiar home in Timberline. It picks up a bitmore drive when the forest animals unite to fight off the hunters who appearfor the start of open season, though even this sequence seems familiar, fromclassic Bugs Bunny cartoons ifnothing else.

The humour is mild to afault, with slapstick and a few poo jokes for thekids but very little clever stuff to keep the adults quiet. One concession tohipper parents is a handful of new (though not particularly memorable) songswritten and performed for the film by Paul Westerberg, former front man of 1980Srock band The Replacements.

Visually, the film combines the stylised look of traditional animation with the fine detail and 3D effect of computer animation. The main characters have a likeable but fairly bland appearance while some of the incidental characters - among them a feisty squirrel nicely voiced by Billy Connolly - are more enjoyably distinctive. With the wilderness backgrounds, the animators go for a stylised, cartoonish look rather than photo-realism.

As well as playing inregular cinemas, the film is also being made available, in North America atleast, in a 3D version (requiring special glasses) for IMAX giant screenvenues. The 3D version (from which this review was written) produces animpressive sense of depth but also some jittery motion that is hard on theeyes.