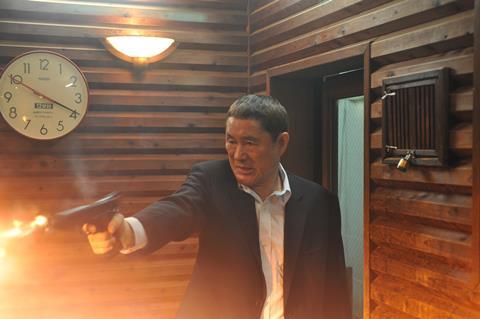 After eight years of soul-searching filmic experiments, using himself, his art and everything he did in the past for metaphorical purposes, Takeshi Kitano is back at what obviously comes easiest for him, another Yakuza picture, his first since Brother (2000). And indeed, he willingly admits that shooting violence is one of his specialties, as simple for him to put on screen as preparing an everyday dish is for an experienced cook.

The film does have qualities that Kitano aficionados will enjoy.

He certainly seems to relish the experience here, improvising new ways of administering brutal beatings, chopping off fingers, sticking chopsticks in victims’ ears, drilling out their teeth, strangling the life out of them, blowing up their heads and more, all with a cold-blooded efficiency that will discourage even his most ardent followers from attempting to make sense of all the mayhem.

His Yakuza films have always been amongst his most successful in international markets, and buyers will be happy to see Kitano back in the gangster market.

Fast-forwarding into a war of succession that shakes the entire Tokyo crime world and spares no one, Kitano’s picture looks dangerously similar to an exploitation movie catering to a type of audience which doesn’t really care who was standing behind the camera.

The Chairman of Sanno-kai (Kitamura), the ruling Yakuza clan in town, is displeased with one of his affiliates, Ikemoto (Kunimura), for striking an alliance with the drug-dealing Murase family. This has to stop immediately and Ikemoto asks Otomo (Takeshi), who heads one of his subsidiary gangs, to appease the Boss and make a tentative move against Murase (Ishibashi).

The film, though, does have qualities that Kitano aficionados will enjoy. The plot, making no concessions, works like a perfectly tuned homicidal machine and all its characters are despicable villains that can’t possibly have any sympathy for them.

Impeccably shot and cut, with clever sound design enhancing the violence, the images rush impetuously ahead, stressing the hard lines of a perfectly ordered world, almost antiseptic in its shining brilliance, a clean bright world, strangely unmoved and unconcerned with the Yakuzas who race through it, frenetically driven in black limousines which more often than not end by being their own coffins.