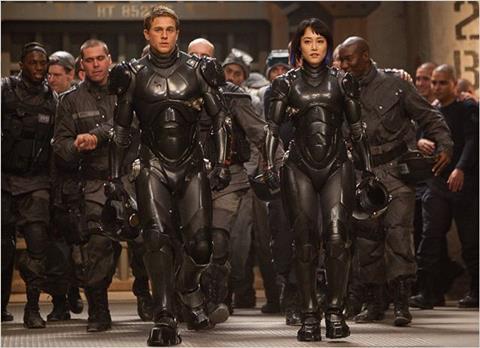 Fanboy euphoria pumped up to gargantuan heights, Pacific Rim tells a rather ho-hum story as an excuse to get to the film’s true reason for being: spectacularly epic battle scenes between robots and monsters. Director Guillermo del Toro has crafted a dopey, earnest and occasionally visionary sci-fi action film that keeps being dragged down by its drab characters and indifferent performances. Perhaps that’s fitting for a movie in which humans take a backseat to effects in terms of generating visceral emotional responses.

Pacific Rim can be powerfully engaging once del Toro focuses on one of several full-scale battle scenes.

Commercially, Pacific Rim (which arrives in the US and UK on July 12) is far from a sure thing: The film features no stars and isn’t based on an existing property. Despite those obstacles, Warner Bros. is clearly hoping that audiences will respond in a big way to the film’s Transformers-meets-Godzilla hook, which could lure plenty of moviegoers.

Del Toro’s name will certainly be an asset as well, thanks to his helming of the Hellboy films, Blade II and the Oscar-winning Pan’s Labyrinth, although Pacific Rim will be the most high-profile box-office test of his career. With a reported budget of around $180m, Pacific Rim could underperform in the States but still reap enough international coin to turn a tidy profit.

Set a little more than 10 years in the future, Pacific Rim depicts an on-going battle between humanity and the Kaiju, which are fearsome, humongous creatures that periodically emerge out of the ocean from a breach that connects our world with theirs. To combat the deadly menace, society has constructed Jaegers, massive robots manned by two human pilots who are linked together by a neural pathway. But as the Kaiju begin to grow in strength — and their appearances on our planet become more frequent — Earth’s fate is in the hands of the very last Jaegers and a small team of surviving pilots, including one, Raleigh (Charlie Hunnam), who lost his brother in a previous battle with a Kaiju.

As he’s demonstrated in his comic-book films, del Toro wields a childlike innocence in Pacific Rim that makes the life-and-death stakes seem rather weightless. Resembling a kid happily smashing his toys together in the backyard while playing pretend, del Toro’s film has an uncomplicated air about it. (Several of the movie’s less-plausible conceits — such as the puzzling need for humans to man the Jaegers from within the robot — seem to have been decided upon because they sounded cool.)

Even when del Toro and his co-writer Travis Beacham lay out some of the characters’ harrowing back stories — which include tragic encounters with the Kaiju — it’s impossible to miss the director’s grinning exuberance about getting to level cities and fire endless amounts of missiles in his movie.

Unfortunately, that enthusiasm doesn’t translate to the cast, who are mostly wooden, undone by clichéd characters familiar from other humanity-versus-aliens survival tales. Hunnam, best known for his role on TV’s Sons Of Anarchy, doesn’t display the sex appeal, rebelliousness or heroism to make Raleigh’s shot at redemption compelling. (As we soon learn, Raleigh walked away from the Jaegers after his brother’s death, too scarred to grab the reins again.)

Additionally, del Toro tries to emphasise the deep connection that Jaeger pilots must share in order to control their robot in sync, but Raleigh and his new co-pilot, Mako (Rinko Kikuchi), exhibit little chemistry or romantic tension. Elsewhere, Pacific Rim is filled with predictably gruff commanding officers (Idris Elba) and comic-relief scientists (Charlie Day), but there’s only so much gusto the actors can bring to cardboard creations.

And yet, Pacific Rim can be powerfully engaging once del Toro focuses on one of several full-scale battle scenes, any pretence of character depth or dramatic nuance stripped away so that really big robots and really scary monsters can duke it out. Unlike Michael Bay’s Transformers movies, Pacific Rim manages to make the super-sized action sequences feel appreciably colossal and yet still understandable. (Del Toro doesn’t cut around so frantically so as to leave the action unintelligible.) And because del Toro has such a sure hand with spectacle, each showdown has at least one or two genuinely arresting moments, with composer Ramin Djawadi providing a hard-edged score to heighten the intensity.

Animation supervisor Hal Hickel and visual effects supervisors John Knoll and James E. Price have managed to craft a series of different Kaiju that are all ferocious, even if none of them are on screen long enough to really leave much of an impression. It’s a failing of Pacific Rim’s — both with its humans and its monsters — that nothing really resonates: They’re all just anonymous pieces within del Toro’s grand design. Especially near the end, when humanity’s very last Jaeger pilots are mounting their do-or-die assault on this underwater interplanetary breach, Pacific Rim never stirs the soul, but it does create a sense of awe thanks to the sheer audacity of del Toro’s vision. This movie works so hard to achieve maximum impact, but it skimps on the micro details.