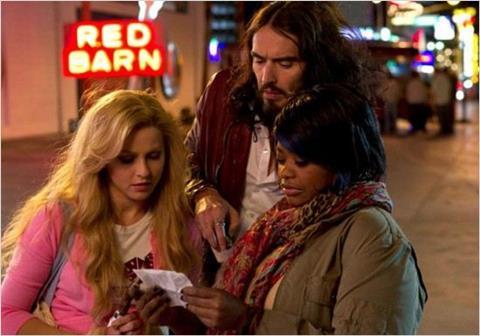 Cody’s script offers a promising set-up and the film starts off with a whimsical tone that suggests the action might unfold in some interesting ways.

The Mandate Pictures production is, in fact, already available on VOD platforms in the US, though it will get a theatrical release through RLJ Entertainment on October 18. Independents that have picked the film up from international distributor Lionsgate may chose similar release patterns.

The female protagonist this time is Lamb Mannerheim (Hough, last seen in Safe Haven), a sheltered young woman from a small conservatively religious town who questions her faith after being burned in a plane crash. With her insurance settlement money in hand, Lamb takes off for Las Vegas in search of a different, more worldly life. There, she meets two other misfits, nightclub singer Lorey (The Help’s Octavia Spencer) and bartender William (British comedian/actor Russell Brand), who ultimately help her find her true self.

Cody’s script offers a promising set-up and the film starts off with a whimsical tone that suggests the action might unfold in some interesting ways. But over the course of what was supposed to be a wild night for Lamb and her new friends, the tone becomes more conventionally dramatic and the film seems to lose direction and spirit.

Hough (whose all-American good looks aren’t affected by her character’s injuries to body and arms) is believable as the conflicted and uncertain Lamb and Spencer plays interestingly against type. Brand delivers his usual charm and Holly Hunter and Nick Offerman (from TV’s Parks & Recreation) show up in brief roles.